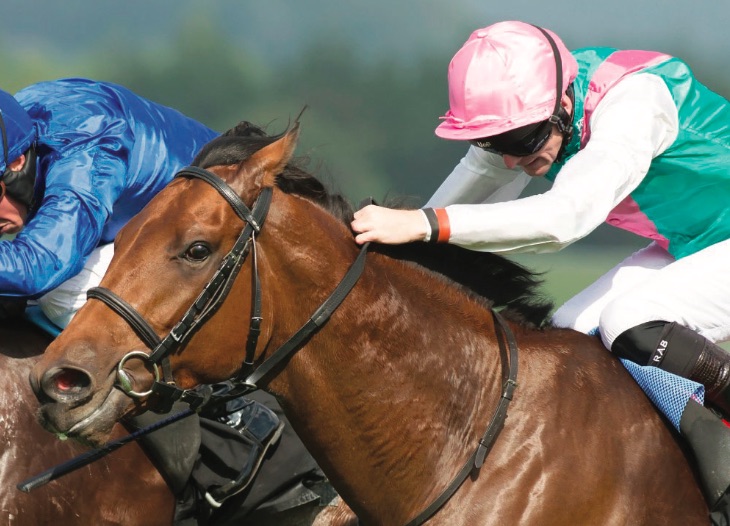 GOOD PRICE. Investec Oaks champion Enable has been priced up at 7-1 for this year's Prix de l’Arc de Triomphe at Chantilly and could be good value for the Group 1 French race.

We have been screaming from the rooftops all summer that the classic fillies in Europe this season are far superior to the colts, and Epsom Oaks heroine Enable rubber-stamped those claims with another runaway victory in the Irish equivalent at The Curragh last weekend.

Frankie Dettori stressed he had resumed riding a er his shoulder injury a week earlier than planned because he didn’t want to miss Enable, and the filly did not let the ‘Italian stallion’ down, breezing home by 5.50 lengths, a performance which so impressed bookmakers they make her co-favourite with Almanzor at 5-1 for the Prix de l’Arc de Triomphe at Chantilly in October.

Enable would have to be supplemented for the Arc, but she is a dual classic winner and her owner-breeder, Khalid Abdullah, also has the world’s most valuable racehorse in Arrogate, so stumping up 120,000 Euros would barely cause a ripple in the Saudi’s bank balance.

John Gosden described Enable as “an exceptional filly”, while Dettori declared “I have not rid- den anything be er this year and she has everything – speed, stamina, the lot. She is the real deal.”

Enable is entered in the King George VI and Queen Elizabeth Stakes on Saturday week, and Gosden won Ascot’s prestigious midsummer championship with another champion three-year-old filly in Taghrooda, in 2014.

However, Taghrooda never went to Ireland, so enjoyed a sev- en-week break between Epsom and Ascot, whereas the gap for En- able, who returned from The Curragh with a slight nick on her o – fore, is just two weeks, so a more likely route to Chantilly would be via the Yorkshire Oaks.

I recommend you snap up the 7-1 Enable for France before it disappears – Taghrooda ran a blinder from an outside draw in the Arc, finishing third to that older French pair, Treve and Flintshire, and Gosden compares Enable favourably with that filly.

Remember, Almanzor has still to have his first race of 2017 and, like his equally talented stable- mate Brametot, is untried over 2400m. With both scheduled to reappear at Deauville on 15 August, Enable fans need to ensure they don’t miss the boat.

Aidan O’Brien had plenty to celebrate at last week’s Newmarket July meeting, winning the Group 1 Falmouth Stakes with Winter’s super-sub, Roly Poly, and seeing Gustav Klimt and Clemmie torpedo themselves to pole-position in the ante-post market for next year’s 2000 and 1000 Guineas respectively with impressive winning performances.

Ryan Moore, who was waxing lyrical a er September had beat- en the boys in the Chesham Stakes at Royal Ascot, paid an even bigger compliment to Clemmie following the victory of Churchill’s sister in the Duchess of Cambridge Stakes.

Moore declared “she is the best two-year-old we’ve seen out this year,” so even a conservative 8-1 o er for next year’s 1000 Guineas might look a “steal” if Clemmie wins next month’s Group 1 Moyglare Stakes at The Curragh.

Gustav Klimt got Moore out of trouble a er he had been here, there and everywhere on the colt en route to success in the Superlative Stakes, though surely we’ll see something even more stunning emerging from the Ballydoyle colts in the second half of the season, so I’m not knocking down doors to get the 6-1 for next May.

The climax to Newmarket’s summer festival, the Group 1 July Cup, proved a huge let down for Coolmore, when the hitherto un- beaten Caravaggio ran a lacklustre race to finish fourth behind fellow three-year-old Harry Angel.

Caravaggio had given “Harry” three lengths start and a beating in the Commonwealth Cup at Roy-al Ascot, but that race must have taken more out of him than even O’Brien envisaged as he never looked the same horse here, being lethargic from the stalls and one of the first o the bridle.

In contrast, Harry Angel, bought by Godolphin before the Royal meeting, bounced back as fresh as paint and made good use of a tow from Caravaggio’s pacemaker Intelligence Cross, settling better and quickening up in style.

“He’s a machine, and it will be a long time until you see a be er sprinter,” beamed Kirby. While Haydock bound Harry Angel, who has the advantage of going on any ground, is the new No 1 on the speed ladder, Caravaggio clearly ran below form and maybe last year’s winner Limato, who was runner-up, is not quite the force of old.

O’Brien is looking towards the Prix Maurice de Gheest at Deau- ville (1300m) for Caravaggio, but, while he has not ruled out a trip Australia for The Everest, the world’s richest turf race run in Sydney on 14 October, I would implore John Magnier and the team to think again.

For me, Caravaggio, a son of USA sire Scat Daddy, would be better served having a tilt at the Breeders’ Cup Mile at Del Mar.

Granted, Caravaggio has never run beyond 1200m and has been proclaimed by O’Brien as “the fastest horse we’ve trained”, but his pedigree gives him every chance of staying a two-turn 1600m.

Furthermore, in my sleep I keep on harking back to Last Tycoon, who was similarly unproven at 1600m when he won the Mile at Santa Anita in 1986.

Last Tycoon was all speed in Europe, winning the King’s Stand Stakes at Royal Ascot and William Hill Sprint Championship (now the Nunthorpe) at York, and would have captured the July Cup, too, had not Yves Saint-Martin overdone the waiting tactics in a slow-run race.

Caravaggio needs a fast-run race – they blitzed through a helter-skelter gallop at Ascot which played to his strengths, whereas they went slower at Newmarket, which is reckoned a 2sec faster 1200m – and he’d definitely get pace aplenty in America. Food for thought for “the lads”.

Meanwhile, while we enjoyed a feast of quality racing in Europe last weekend, this weekend looks more of a famine, with all the top horses being kept back for the King George meeting at Ascot or Glorious Goodwood.

Highlight on Saturday is the £250,000 Super Sprint at Newbury, a race which Yorkshire trainer Richard Fahey seems to have a habit of picking up every two years.

He won it in 2013 with Peniaphobia, who later proved a sensation in Hong Kong, and again in 2015 with Lathom, and in MAG- GIES ANGEL, runner-up in a Listed race at Newmarket three weeks ago, he has a filly who can continue the sequence. 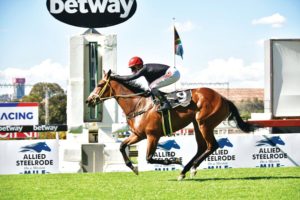