Vacquero and Cascapedia could spoil the party for the training partnership. 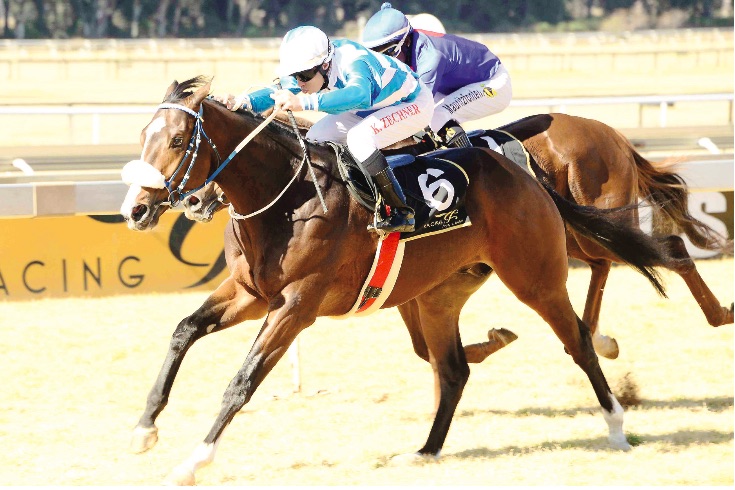 EXACTA HOPE. The Azzies will be hoping Full Mast (pictured) and Greek Fire will come home 1-2 in Race 3 at the Vaal tomorrow.

The father-son training partnership of Mike and Adam Azzie could be in the money at the Vaal tomorrow when they could saddle the first two past the post in Race 3, a Graduation Plate over 1800m.

Both Full Mast and Greek Fire are lightly raced and still improving, so they could be far better than their current ratings, which place them down the list of best weighted runners.

Full Mast has run three times for a win and two close-up seconds, most recently when the son of Go Deputy hung in and suffered interference before going down 0.40 lengths to Daytona Charger over the Turffontein Inside 1800m. The form of that race has been franked. He certainly gets the distance and could well recoup his supporters’ losses.

The Azzies will also saddle debut winner Greek Fire in the race. That race was over 1450m on the Turffontein Inside track and Greek Fire won very easily. This race is over much further, but Piere Strydom takes the ride and that hint must be noted.

Vacquero got his first win on record on his third attempt, beating So Long Spring by a long neck over 1800m on the Turffontein Inside track. Two of his conquests have subsequently come out and won, so there is every reason to expect another good run from the Robbie Sage-trained son of Silvano.

Irish-bred Cascapedia will also put in a bold bid. The High Chaparral four-year-old filly won her first two starts very well before finishing fourth over 1800m at Turffontein last weekend. This race might come too soon.

A Quartet with Full Mast and Greek Fire for first and second with the field for third and fourth will cost R20.

Roy Magner-trained Pillaro heearth has been knocking at the door and rates the one to beat in Race 7 over 1000m.

This King’s Chapel colt had three of these runners behind him when beaten just 0.60 lengths by Alpine Echo over this distance at Turffontein last month and is holding form well.

Cataluga could be second best but this six-year-old mare, while still enjoying her racing, does not have as much physical improvement as her younger rival, who will be growing stronger every day.

The other runner who could give cheek is Unchained Melody, who has won two of his last three starts, most recently beating another Magner-trained horse Chief Sioux by 0.75 lengths over 1000m at Turffontein. Chief Sioux reopposes on the same terms and Unchained Melody should also beat Dream Leader, Kontiki and Daspoort again at the weights.