Our Mate Art holds off favourite to win. 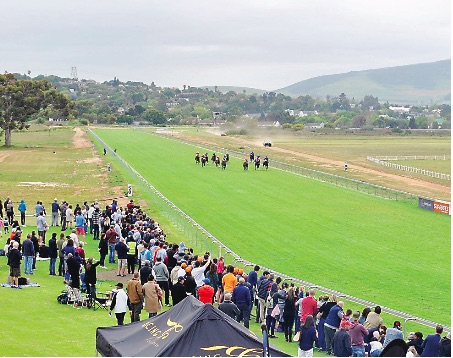 Trainer Glen Kotzen has left plenty of time to get Gold Standard ready for his chief target and, not wanting him to peak too soon, will have been happy with the Trippi colt’s fourth in Saturday’s World Sports Betting Matchem Stakes (Grade 3) over 1400m.

The race was won by match ready Our Mate Art, who led just over 100m out and held a rallying 3-1 favourite Table Bay off by 0.40 lengths. Silicone Valley finished like a bolt of lightning from the back and took third place with Gold Standard another 0.50 lengths behind in fourth.

It was a great comeback run by Gold Standard, who had been on the sidelines since finishing a great fourth in the Sun Met in January.

He chipped a fetlock and Kotzen gave him plenty of time after arthroscopic surgery removed the tiny piece of bone.

He was seen having a grass gallop at Kenilworth a few weeks ago, “but we’ve not had access to grass for another gallop since, so while he is looking magnificent, I am not really expecting reworks,” said Kotzen before the race.

Gold Standard, a grandson of Olympic Duel one of the top racing fillies of her era has a progressive itinerary planned in the three months leading up to his main target, the Sun Met. It comprises runs in the Green Point Stakes in December and the Queen’s Plate in January.

He is owned in partnership by Drakenstein Stud in whose silks he runs and the Hugo and Suzanne Hattingh’s Chrigor Stud.

Hugo Hattingh has been in horseracing for 25 years and Gold Standard is not the only top horse he has in training with Kotzen at the moment. He also races Final Judgement under the name of his Tripple H Trust with Peter de Beyer.

She ran no sort of a race in the Diana Stakes at the meeting, but raced wide the whole way and never quickened in the straight.

The Hattingh’s had two runners in Race 7 at the meeting, dubbed the “official” opening of Durbanville, which was completely revamped this year and only recently reopened. They were Eyes Wide Open, winner of the Premiers Champion Stakes at Greyville on Gold Cup Day, and Pack Leader.

Both were in need of the run, finishing unplaced behind Kasimir, but should certainly not be written off over a distance probably too short for them.

Honours in this 1200m race went the way of Kasimir, who beat Woljayrine and Al Mariachi.

While Kotzen was happy to get his top runners back to the racecourse, he did warn punters to beware of wide draws.

“The draw bias seems as bad as it was before of course, there will be the odd exception, but I’d rather not run a horse who draws wide.”