Hewitson makes for great eachway bets in Race 3 aboard Oyster Pond and Race 4 on Oriental Tiger. 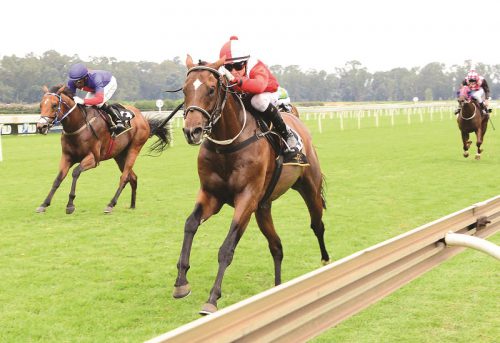 Apprentice Lyle Hewitson is unbeaten on Maximizer and the pair will team up again in Race 3 at the Vaal today.

Lyle Hewitson sits comfortably on top of the apprentice jockeys log, leading by a whopping 61 winners. He’s been riding his best season yet and could add a couple more winners to his rising tally at Fairview on Wednesday.

The combination of Hewitson and Yvette Bremner has been in great form and could well kick off the day’s proceedings with a winner in Race 1, a Maiden Juvenile Plate over 1400m on the turf track. Bremner’s charge Copper Trail shoulders level weights with the field and improved heaps on his debut run last time out when only a 3.50-length third behind Desert Chief. That run suggests the bump up to 1400m could prove healthy for this gelding, making him the one to beat.

The next race is filled with first timers and could prove rather tricky to assess – follow the money. Hewitson makes for great eachway bets in Race 3 aboard Oyster Pond and Race 4 on Oriental Tiger.

Perhaps the combination’s best bet on the card could be Le Grand Rouge in Race 5, a MR 72 Divided Handicap over 1000m. A son of Western Winter this three-year-old left quite an impression in his debut run when making light work of his opposition to win by 3.75 lengths. He shoulders 58kg and although he’ll have to overcome a wide No 12 draw that victory tells me his class will see him through.

Maverick Girl returns from a short 82-day rest and could be returning to winning ways in Race 6. This filly will have a lot to do in this Graduation Plate but could be the right pick. The race looks competitive with not much between runners on form, but it isn’t the strongest field Maverick Girl has faced. She’ll shoulder 60kg and will jump from a decent No 9 draw so could go close.