July day a ‘strike out’ for Piere

Disaster: Objection, suspension and injury makes the July, a meeting to forget. 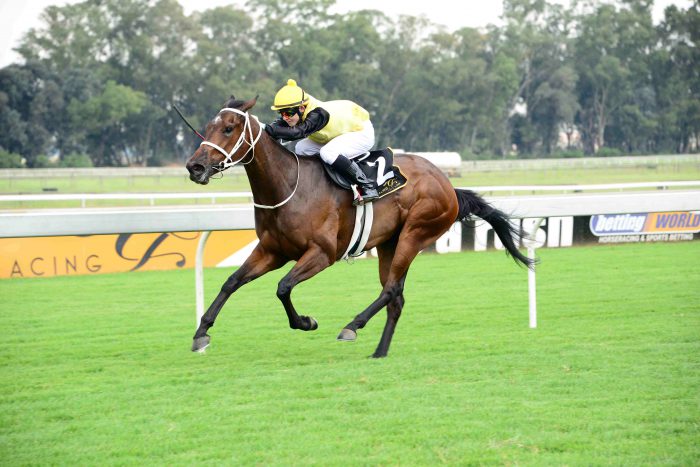 VALUE BET. Piere Strydom believes the fast conditions will suit Captain’s Girl when she runs in Race 7 at Turffontein today.

We all have good days and bad days. Last year’s July day was great for me as I won the Vodacom Durban July on The Conglomerate. This year I finished midfield on It’s My Turn but the rest of the day was a disaster.

I won the Gold Vase on Captain Splendid but lost the race on an objection to Hermoso Mundo, received a fine, a 10-day suspension and later on gave away a winning ride because I was medically booked off for a couple of weeks.

However, over the years you learn to cope with the highs and the lows, because this was not the first time and it won’t be the last time. I’m just happy in myself that I’m a realist, and that I can put these things behind me.

Congratulations to this year’s winning horse, Marinaresco, and his connections. In fact, my very first phone call was to get the ride on Marinaresco as I felt last year he was a little unlucky but he showed he could make up ground in that short straight.

Special congratulations to Candice Bass-Robinson on becoming the first woman to train a Durban July winner.

Last week in this article I said the Durban July was the old brigade against the younger horses and that’s the way it worked out. You have to give full credit to the handicappers who had the merit ratings spot on. Marinaresco won despite top weight with the two three-year-olds separated in second and third places by a short head.

The most impressive winner on the day was Bela-Bela in the Jonsson Workwear Garden Province Stakes over 1600m. It would have been interesting to see how she would have performed in the big race but the fact she won another Grade 1 in the manner she did indicates the right decision was made.

We race on the Standside track at Turffontein today and have quite a competitive race to kick us off, a Maiden Juvenile Plate over 1600m.

The two with the best form are Battle Front and Wheel Of Time. I’m leaning towards Battle Front as he attracted money on his only start and naturally can make more improvement. The two dangers have to be Gambado and Vacquero who ran on well last time from a very bad draw.

Race 2 is another Maiden Juvenile Plate but this one is over 1160m. We have Zerodarkthirty as the runner to beat. He showed lots of speed last time and the only danger looks to be Manitoba who was running on last time and was just a head behind Zerodarkthirty at the finish. However, the early speed of Zerodarkthirty should be in his favour and he can finally break his maiden. I make him a BiPot banker.

Race 3 is the first leg of the Place Accumulator and in this race Flying Fable ran a very good race first time out and just got beaten. My only concern is that as this was her first start this run could have come up very soon for a young filly. Therefore include another horse of your own fancy, taking note of any unraced horse who receives betting support.

Race 4 is a Maiden Plate over 1160m where the majority of the horses are older but after a number of runs have not shown much form at all.

For the Pick 6 you only need to include Lobo’s Legend and Sweet Trial. For the PA banker one or the other but also take note of Mujaafy, the unraced horse from the Mike de Kock yard.

Race 5 is yet another Maiden Plate and with the scratching of Skiminac I will make Matthew Lips a banker in all bets. He has good form and even though he is already a four-year-old, he won’t get a better opportunity to open his account.

Race 6 is a Pinnacle Stakes race where your highest merit rated horses should come out on top. That honour goes to Wrecking Ball and Effortless Reward who has improved by leaps and bounds since some issues were resolved.

Because Effortless Reward is fit and well and will enjoy the fast-running track, she could be a possible Place Accumulator banker. For the Pick 6 Wrecking Ball is the only other inclusion.

Race 7 is a fillies’ handicap and this is where it gets a lot trickier. The three with the best form are Captain’s Girl, Lady Of The World and Jameson Girl but as the track is firm and fast I would lean towards Captain’s Girl as my first choice. For the Pick 6 go with all three and for the PA put in Captain’s Girl and one of the other two mentioned.

Race 8 is a handicap with a lot of these horses having solid form of late. I’ve won on Amsterdam and it could be an asset to be drawn No 1 on the Standside track. Unfortunately sometimes he can play up in the starting stalls and therefore fluff his line completely.

I’ve also won on Happy Pills who is a three-year-old and definitely on the upgrade. He’s also a long-striding horse who takes time to build up to his top speed and therefore should love this course and distance.

But the majority of these runners have winning chances with lightly raced and recently gelded Daffiq being the unknown factor. He is also trying 1800m for the first time and we are not sure whether he will stay the distance.

For the PA put in Daffiq and Happy Pills, for the Pick 6 put in as many as you can afford.

Race 9 is another fillies’ handicap and we have a number of horses with winning chances. As we have gone quite lightly through the meeting, we can go wide here. For the PA consider Bright Bronte, Dawn Flight, Cape Infanta, Burning Rock and Emerald Bay.

Others to consider for the Pick 6 are Prada Princess, Miss Bulsara, In The Web and Cosmo Russe. I rode Miss Bulsara last time when she won very well. However, it was a slow-run race with a false pace but she did win it with consummate ease.