Met all about Legal Eagle

Strydom rides legislate who he beleives will finish in the money 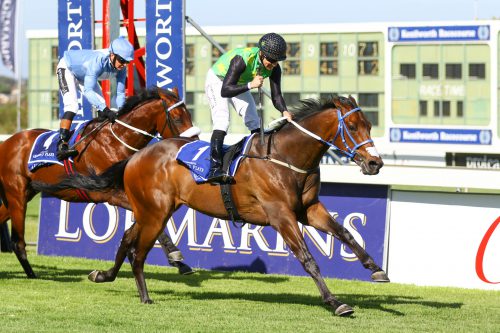 Today I’m back in Cape Town to ride in the J&B Met, probably the second most prestigious race in the country after the Vodacom Durban July. If racing had to have a Grand Slam, the Met would be one of the events.

I am aboard Legislate for the Justin Snaith stable and on form I’m quite happy to have a ride with a decent chance. But in saying that he is running over 2000m, he is quite a difficult horse to manage and obviously the longer the distance the slower the pace – and the more difficult it is to settle a horse who wants to race very hard.

Legislate did finish second to Legal Eagle in the L’Ormarins Queen’s Plate last time and I think it will be difficult to reverse that result as the 1600m would have been more in his favour than Legal Eagle’s who will be better suited to 2000m. The fact that he beat us comfortably last time and has 0.5kg less to carry could make him a banker in the Place Accumulator and Pick 6.

The runner who could chase him home is Futura, as last time the pace was very slow and he had too many lengths to make up in order to be effective.

If all goes well on my end, I hope to run into the money. A place is a more realistic outcome but I hope to win another Met as I have only done it once in my career and that was with Angus in 2003.

I’m riding Trip Tease in the Betting World Cape Flying Championship and as it is a weight-for-age event we come in quite well under the conditions. The highest rated horse is Carry On Alice but as she fluffed her lines last time that leaves Trip Tease as the highest rated runner. Sadly he has not raced for quite a while and is drawn on the outside, so you will need to keep an eye on the earlier races up the straight to see which side of the track is the best on the day.

He also has a tendency to play up at the start and for that reason I’m leading towards Brutal Force as the likely winner. But as he is a better 1200m horse possibly the next best is Tevez.

My best ride on the day could be Star Express in Race 2. She ran against some of the top three-year-old fillies in the country in the Grade 1 Maine Chance Farms Paddock Stakes over 1800m. Although she ran unplaced she finished close up behind Smart Call but my only concern is whether she will see out the distance.

We have a meeting at Turffontein as well on the Inside track and once again the draws are vital. In Race 1 my first selection is Cat’s Whiskers who was beaten by a whisker in her only start. I like Variety Spirit and Spirit Of Love to chase her home.

Race 2 is another Maiden Plate with some average fillies and the form of Span Die Seile stands out in the field and should make her a good bet. Tiana and Youcanrockme look likely to follow her home.

Race 3 is the first leg of the Place Accumulator. My first selection is Schillaci and for those who want to go light he could be a PA banker. But as he has had many chances it might be worth including Go Fly A Kite and you might just double up in the PA.

Race 4 is very difficult and competitive and most of the runners have had many chances so it could be worth going wide. My selection is Pyramus, Intandokazi and Ilitshe. Others to consider could be Calico Quiver and Summit. For the PA put as many of those mentioned as you can and for the Pick 6 put them all in and anything else you may like.

Race 5 is a Novice Plate so your best rated horse should win. I’m going to agree with the ratings and make Sharp Princess my best bet on the card. Last time she ran against some top colts and was not disgraced. You can banker her in all bets.

The unknown is Polyphonic so if you don’t like Sharp Princess you can then consider Alec Laird’s charge and Intergalactic.

Race 6 is a handicap but two horses have solid form and could be improving and they are Caymen Sunset and Wild Brier. Include both in the PA but for the Pick 6 Finchatton could be added in. He has not run for a while so I’m not sure about his fitness.

Race 7 is a handicap with none of the horses having outstanding form. My selection, in order, are Kingkovsky, Dirty Champagne, Viking Castle and King And Empire. All of those should go into the PA and for the Pick 6 put in as many as you can afford, possibly even the field.

Race 8 is the J&B Met which forms part of the Turffontein card and I believe Legal Eagle is the horse to banker in all bets.

Race 9 is another handicap for fillies and mares. My selections are Rebel’s Girl, Save The Day and Spring Wonder. Put them all in the PA and for the Pick 6 include as many as you can afford.

In Race 10 my selections are Second Bite, Antonia Major and my value bet on the day, By Jove. By Jove has not been beaten by far in her last couple of runs, her merit rating is coming down and she has had some shocking draws to overcome. This time she is drawn No 2 and could end everyone’s day on a happy note.