And the award for best dressed goes to …

Margot Robbie dazzled in a breathtaking Chanel column dress, and Emily Blunt stood out in a pink crystal gown. 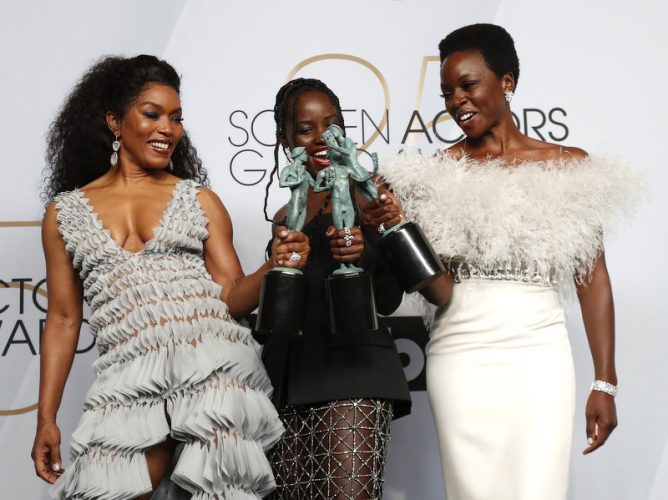 Angela Bassett, Lupita Nyong’o and Danai Gurira pose with the award for Outstanding Performance by a Cast in a Motion Picture in Black Panther.

The Screen Actors Guild (SAG) awards are part of the conglomerate of ceremonies that are key in pointing out the most talented of the movie industry.

Superstar singer and actress Lady Gaga was nominated for Female Actor in a Leading Role for A Star is Born. Gaga didn’t win an award but certainly took the public vote for the most classic fashion and beauty look, wearing a Dior Couture gown, reminiscent of the dress Marylin Monroe wore in the 1955 film, The Seven Year Itch.

The dress was given a slightly modern twist with a high side slit, giving fans a glorious display of her lovely long and toned legs. Keeping to the elegance of the look, her bleached blonde hair was pinned in a low side bun with a slight bump of pincurled side bangs.

Gold accessories included earrings, a choker, bracelets and a ring. Gaga matched her makeup with her nails in a burgundy colour not too bright or overpowering.

Nominated for Outstanding Performance by a Female Actor in a Lead Role, @LadyGaga lit up the red carpet at the 25th SAG Awards in Los Angeles in a sensational frayed-edge ivory taffeta gown from the Spring-Summer 2019 Haute Couture 2019 collection by #MariaGraziaChiuri. #StarsinDior

Veteran actress Glenn Close, winner of the Outstanding Performance by a Female Actor in a Leading Role in a Motion Picture for her role in The Wife, came in as a close second in an off-white Ralph Lauren pants-suit.

Her statement accessory was her late grandmother’s wedding ring which she mentioned in her acceptance speech. In an important tribute she explained that her grandmother had wanted to be an actress and never got the opportunity. “

She never would have been allowed to do that. I feel like I’m carrying the women in my family who were wonderful mothers and wives, but could have had more personal expression probably,” she said.

Close kept her hair closely cropper and slightly curled at the end.

A touch of nature

Black Panther actress Danai Gurira – part of the cast that won the Best Ensemble Cast Award in a Motion Picture – wore a pearly white Ralph & Russo gown. The top half was a feathery bodice with a sleek, straight cut skirt.

Gurira wore her natural hair in a high top and added minimal diamond accessories. Her makeup was clean and natural so as not to overpower the drama of her gown.

Actress Margot Robbie dazzled in a breathtaking Chanel column dress, and Emily Blunt took the opportunity to stand out in a pink sorbet-shaded crystal Michael Kors gown accessorised with a silver clutch from Jimmy Choo.

Winner of Outstanding Performance by a Male Actor in a Leading Role for 'Bohemian Rhapsody', @RamiMalek, long a red carpet flag bearer for the House's style, kept it monochrome in a #DiorPreFall 2019 men's 'Tailleur Oblique' tuxedo by @MrKimJones when he turned out to attend the 25th SAG Awards. #StarsinDior