‘Too sokkie-sokkie’: Designer weighs in on Team SA’s Olympic kit

Designer Craig Jacobs gives us his professional take on Team South Africa's Olympics kit, which left many scratching their heads. 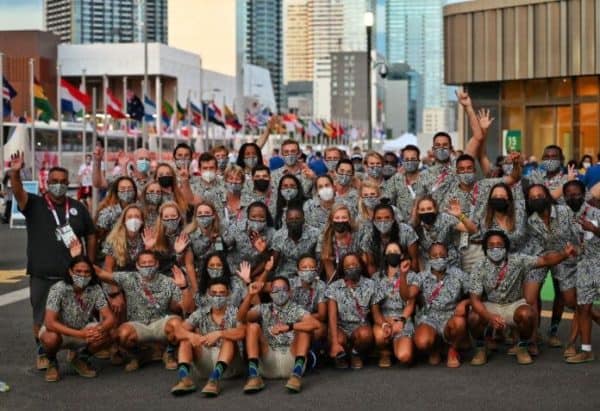 And while most of us should have been excited to see our favourites representing the country at the biggest games in sport, something was distracting us from this momentous occasion.

South Africans were not thrilled with the kit the team was wearing. And this was for a second time. The Rio Olympics’ oversized tracksuits weren’t much better, either.

They explained that the national flower, the protea, and zebra print were all inspiration for what many called an ode to game rangers on safari in the Kruger Park.

The veldskoen was announced as being the official shoe months ago, being the oldest recorded shoes in Mzansi.

READ MORE : How ‘Voortrekker’ shoes became the talking point of the opening ceremony for Team SA

His inclusive fashion label has showcased at all major fashion weeks and continues to promote the South African aesthetic.

What would you suggest the national team should wear?

I do feel the pain of those young designers, who really wanted to do us proud but unfortunately it really didn’t capture our national pride.

Our blessing – the rich diversity of cultures in Mzansi – also is our biggest challenge, because you really wouldn’t want to elevate one group over another.

So my starting point would be to look at what unifies us, and instills pride in who we are, and use that as the primary source of inspiration.

Firstly, sticking to our national sporting colours of green, gold and white – after all, this is the world’s biggest sporting event, so there’s no reason to veer off script.

Print-wise, I am a big cheerleader for our rich biodiversity, so the protea would be my print of choice, but allowing the elliptical leaves to inform a dynamic and oversized print in a subtle but striking way.

And importantly, now more than ever we need to celebrate the artisans and makers who are the unsung artists reflecting our way of life through their hands so I would work with them to find ways to infuse the designs with their handwork to make it more human.

The veldskoen is the longest recorded SA shoe in history, would you still incorporate that?

I do think the veldskoen is iconic so I don’t have a problem at all with the footwear – and I did like the contrast red sole of the shoes I saw.

I just think that, whatever is worn it has to feel cohesive and modern – putting the male athletes in khaki shorts with black flag-patterned socks and brown veldskoene just felt a bit too sokkie-sokkie for me.

How do make sure that we include South African designs or elements in future sport gear?

Be mindful of the rich diversity of our culturally life, so the design would need to be infused with symbols which instill pride in all of us, reminding us of who we are and what we as a nation are proud of.

Less is more: The big five plus the Madiba shirt plus this and that just ends up becoming one big, hot mess.

For me, the national outfits which stood out the most for me were ones which honed in on only one or two national symbols and designed their outfits around them.

For instance, I loved the way Italians unpacked their distinctive flag into a design which felt fresh and modern while the red and gold stripes on the Angolan athlete’s outfits created an undeniably African design that was simple and very wearable at the same time.