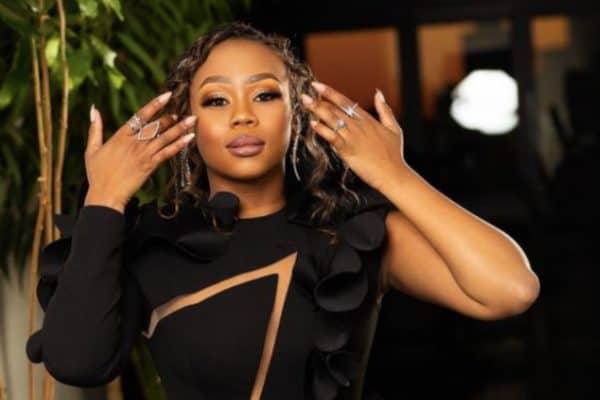 Co-host of the 27th annual SAMAs, Bontle Modiselle styled by Kgosi Lesego in a dress by Retha N | Picture: Instagram

Despite being recorded in a Johannesburg studio under strict Covid-19 level 4 lockdown protocols, the 27th annual SA Music Awards (#SAMA27) did their best to deliver some semblance of a red carpet.

As opposed to the usual two-night format, the 2021 Samas were staged as a one-night virtual extravaganza to celebrate the best of proudly South African music talent.

Among the night’s guests who made an effort to get dressed up was Bucy Radebe who was up for White Star Newcomer of the Year Award. Radebe opted for a black sleeveless figure-hugging gown.

Goodluck’s Juliet Harding sparkled in a sequined bodysuit and strappy heels before changing to perform on the SAMA27 stage alongside her bandmates.

Black Motion’s Bongani Mahosana aka DJ Murdah chose a more avant-garde look with a design decorated with ropes around his thighs for the SAMA27 red carpet. His bandmate Thabo Mabogwane paired his black suit with a yellow T-shirt and patent leather shoes. Black Motion is nominated for Best Dance Album and they also performed on the evening.

Hle, a Sofnfree Female Artist of the Year nominee, shimmered in an orange dress with sparkly crystal details while Vendaboy – who is one of the night’s performers – chose a dusty pink suit with a white shirt.

No stranger to the SAMA27 red carpet, rapper Nadia Nakai went for a dramatic red gown with feathers and a mermaid-tail detail.

Performer Msaki went for a futuristic silver jacket and a black structured skirt with a tail while nominee and performer Sun-El Musician stole the night with a patterned black and white tux. He topped off the dapper look with trendy designer loafers.

The award show was hosted by Lawrence Maleka and Bontle Modiselle Moloi who brought their own looks to both the SAMA27 red carpet and stage.

They were joined (albeit from home) by presenters such as radio and TV personalities DJ Speedsta, Lamiez Holworthy and DJ Sabby, podcasters MacG and Sol Phenduka, Miss Soweto Thobile Steyn and Motsweding FM personality Ltk.

More than 40 awards were set to be handed out at Saturday night’s proceedings including the newly unveiled Best Amapiano Album, Best Gqom Album and Best Kwaito Album awards.

“History will be made when the first ever public-voted Artist of the Year award will be presented. Other categories voted for by the public are Record of the Year and Music Video of the Year,” said organisers in a statement.

“The SAMA27 red carpet is a production on its own. We recognise that music and fashion go together and even in a virtual production we still shine some spotlight on the looks our nominees chose to celebrate their big night… Congratulations to all the nominees for getting this far,” commented RiSA CEO Nhlanhla Sibisi.

READ NEXT: Makhadzi gets zero SAMA nominations and Kelly Khumalo unimpressed with her nod