At least this is what the designers of a new package say. 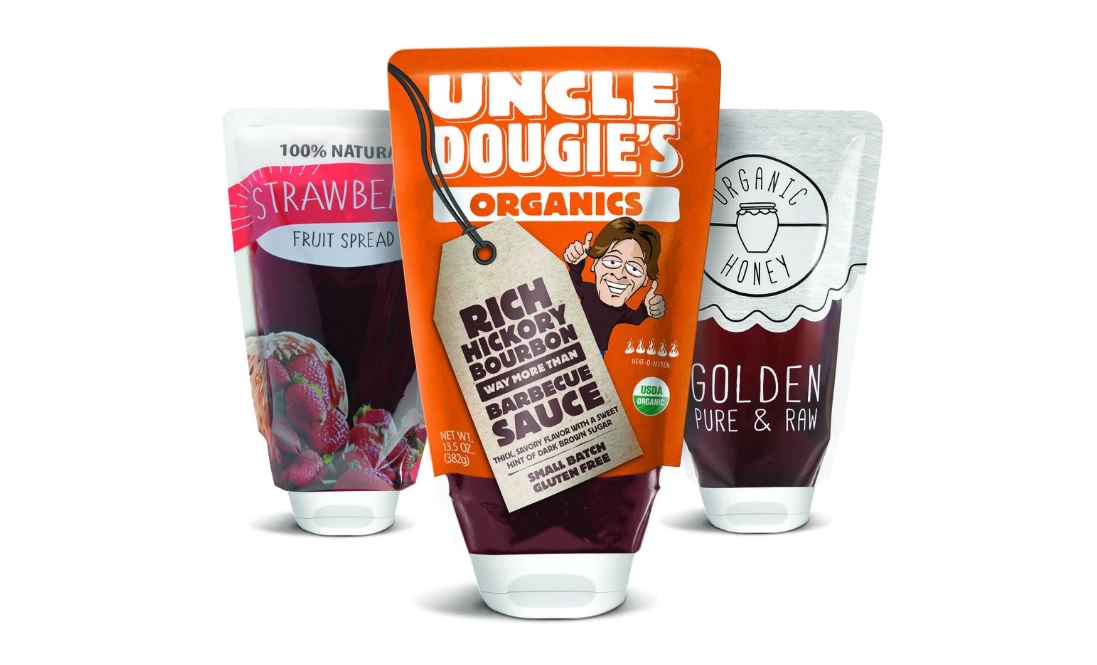 Remember when ketchup turned upside down? Or when half gallons of milk grew plastic screw caps on their sides? We are resistant to change in food packaging, attached to our squeezy honey bear, Toblerone’s triangular prism, the resealable paperboard tube that houses Pringles’s neat stack of hyperbolic paraboloid chips.

But what if there’s a better way? (Seriously, try going back to doing the pinchy-pully motion to open the cardboard wings of a milk carton without mauling things.)

Something new is coming and soon you will scarcely remember when it didn’t exist. It’s called the Standcap Inverted Pouch. Daisy brand sour cream led the charge, debuting their Daisy Squeeze in 2015: a soft-sided, inverted wedge shape with a flat, flip-top dispensing closure on which it sits jauntily. It rolls down like a toothpaste tube, uses gravity as an assist and minimizes the introduction of oxygen, thus slowing spoilage.

What’s behind the pivot? Some is financially driven: In the first year of its pouch, Daisy reported a 69.7 percent increase in sales (despite charging about 25 percent more per ounce than for the traditional tubs).

But according to Ron Cotterman, vice president of corporate innovation and sustainability for the packaging solutions company Sealed Air, some of the drive for innovative packaging is a turn away from glass. He says in the past decade there’s been a shift for three reasons: One is the cost of transporting and storing a heavy product, the second is the perception of safety (consumers fear breakage and shards) and the third is that there are not a lot of end markets for the glass. There has been a significant shift away from municipalities recycling glass because of the enormous cost associated with it.

“Part of it is consumer-driven,” Cotterman says. “But it’s also about sustainability. Walmart has its Project Gigaton goal to avoid 1 billion metric tons of greenhouse gases from the global value chain by 2030. And Amazon aims to make half of its shipments carbon neutral by 2030.”

The race is on to replace heavy, bulky cans and jars with flexible packaging that can be stored flat for shipment before being filled.

That flexible standup pouch requires significantly less water, and produces fewer greenhouse gas emissions and other waste, says Evan Arnold, the director of product development and engineering at flexible packaging firm Glenroy, one of three companies that collaborated on the pouch.

“I just spoke at the Association of Dressings and Sauces technical meeting in Louisville and I asked everyone if they wanted to save the world. And I meant it, kind of,” Arnold says.

Fine, world-saving. But let’s talk about flips, drips, lips and other quotidian woes. There’s the jerking motion required to coax a viscous liquid down the neck of an upright glass or hard plastic bottle (and the anguish of an unexpected deluge), then the wrist-flick flip back upright so gravity halts the flow. There’s the goo that accumulates around the lip and cap of a regular bottle. And there’s the vexing last 10 percent of a product that clings stubbornly to the container’s innards, taunting you and wasting your money.

Aptar is the company responsible for the Standcap’s silicone dispensing-valve technology. Regular inverted bottles with dispensing valves have a re-intake of air after you squeeze (like a shampoo bottle). Aptar’s invention dispenses and cuts off the product without introducing air. According to Rob Johnson, chief executive of Original Uncle Dougie’s, this feature dramatically extends shelf life.

But there are other reasons companies might be shifting to this kind of package. It’s about a cultural shift, taking a product like sour cream from an ingredient (the anchor to a casserole or coffee cake) to a condiment.

“All of the research going on would validate this,” Johnson says. “More and more people are using dipping sauces as a way for people to add flavour to food. A lot of restaurants are doing that.”

The New York Times took some heat several years back for suggesting that millennials were killing breakfast cereal because there was too much cleanup. There is validity to this: Younger generations don’t want to dirty silverware if they don’t have to. Thus, the condimentisation of foods. Look for the Standcap soon for nut butters, salsas and jams, that Aptar valve adjustable for different thickness and chunkiness levels.

For now, the Standcap Inverted Pouch is a novelty that stands out, and up, in the condiment aisle. (The more elongated the package, by the way, the more consumers perceive they contain, so the Standcap may trounce squattier tubs for eye appeal.)

But companies may also be playing to consumer psychology. Products that reside in the door of the refrigerator see more action. A tub gets pushed to the back of the fridge and into Siberia, green fuzz and solitude its inevitable fate. This new technology’s upright design makes it door-appropriate, living cheek to jowl with heavy-rotation items. The Standcap Inverted Pouch may, in a sense, give companies a foot in the door. From vinho verde to rosé: A world tour of wine trends for 2022
9 hours ago
9 hours ago

From vinho verde to rosé: A world tour of wine trends for 2022
9 hours ago
9 hours ago