While it is not as kitsch as perhaps a footballer’s wife’s nouveau riche bling with furry, screaming pinks, Nkandla will likely never make a cameo on Top Billing or feature in World’s Most Beautiful Homes.

If former president Jacob Zuma’s Nkandla was a song, the singer would most definitely be somewhat off-key.

The compound in the KwaZulu-Natal hills cost the South African taxpayer well over R250 million.

But when you take a closer look at an image taken during the Economic Freedom Fighters Julius Malema’s recent “tea date” , taken in Zuma’s personal quarters, the enormous public bill makes even less sense.

“The most expensive items in the room are the air conditioner, the tea set and probably the bear skin tucked in the left-hand corner of the room,” says Joburg interior designer Adrienne Bayhack of Room-to-Room Interiors.

“The rest,” she says, “is a combination of a classic style room design mishmashed with African themes.”

Bayhack adds that the bearskin – on the left of the photograph – also adds a third, more foreign element to, if one can call it that, the design of the room.

Wingback chairs are also classical furniture but, covered with animal hide, they resemble two matching thrones where, perhaps, decisions of national importance were made and large cheques signed. 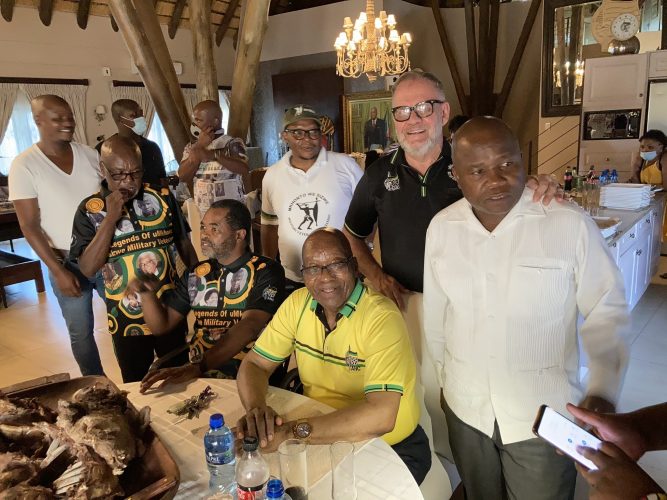 “The thatch, the curtains, the clock and the furniture, it doesn’t go together … I would have thought a zebra skin in a part-African themed room would have been more appropriate than a snarling bear.”

But then again, that could depend on which of your friends gifted it.

“The tea set looks like it could be a very valuable, classical Noritake set,” she adds.

It’s a great match with the chandelier overhead that could also equally be at home suspended from a Randlord’s ceiling in Saxonwold.

Behind the pair, a lonely wall unit is islanded near the staircase. It bears a sign that reads “Home”. The great Nkandla bill inspires a hazarded guess that the letters may be solid gold.

Taking a step back and looking at the picture of the room holistically, Bayhack says “you could say that this is a look of classical opulence gone really wrong”.

While it is not as kitsch as perhaps a footballer’s wife’s nouveau riche bling with furry, screaming pinks, Nkandla will likely never make a cameo on Top Billing or feature in World’s Most Beautiful Homes.

As much thought may have gone into the design as, perhaps, it did to public spending during its occupant’s time on the throne.

Maybe this is a pastiche of our relationship with the legend of Nkandla, where nothing quite has, or will ever make sense.

We will never know what we do not know, and if some of the testimony at the Commission of Inquiry into State Capture is anything to go by, we will also never really know what we think we know. However, one thing is for sure, the proof lies in the pudding – a bankrupt pudding.