The launch in Egypt has received quite a reaction from South Africans on social media because of its similarity to our minibus taxis. The recent launch of the Uber Bus in Egypt had South Africans worried that the Mzansi taxi industry would not take kindly to it. Image: Twitter/@Uber_Egypt

Uber expanded its imprint on public transport with the launch of Uber Bus in Egypt on Tuesday, reports Caxton Central. Egypt is the first country to roll out the service globally.

Proud that Cairo is the first city globally to roll-out—Uber Bus! Built for Egypt as an affordable way to get around the city everyday #UberForEveryone pic.twitter.com/RZkmMq7ddx

Passengers will be able to request an Uber Bus using the app and will be matched with other riders on a suitable route. Riders are allowed to pay with cash or card, and will only be able to request Uber Bus if their pickup and dropoff locations are within the currently serviced neighbourhoods in Cairo.

Uber wanted a piece of the competitive bus servicing industry in Cairo where bus-booking companies are looking to create cheaper and more reliable alternatives to public transport. Although the announcement was welcomed globally, it didn’t take long before South Africans took to their social media platforms to voice their concerns over the possibility of the service reaching our shores.

Uber released a statement saying they had no intention of launching this service in South Africa, and would never contemplate launching it without full industry engagement and support. The bus service would rattle an already volatile public transport system in South Africa where the majority of the country uses mini-bus taxis as their main form of transportation.

For those asking about UberBus – this was launched in Cairo, Egypt. We have no plans to launch this product in South Africa and we would never contemplate launching it without full industry engagement and support.

Uber has also announced a price hike in South Africa starting on Friday. The taxi ride service released a statement saying they always try to keep prices as low as possible but have chosen to increase fares after taking into consideration the concerns of riders and driver-partners alike.

From 7 December 2018, fares in South Africa will increase by 5%. The new pricing means that we can help provide improved economic opportunities for driver-partners, as well as a safer, more reliable service for riders. Find out more: https://t.co/x7RmBKOO83 pic.twitter.com/UdTrP6uXuZ

“We’ve chosen to increase fares by 5% in South Africa from 7 December 2018. This comes after implementing an in-depth earnings review to ensure that the Uber app continues to be a reliable economic opportunity for drivers, as well as an affordable option for riders,” said Uber. 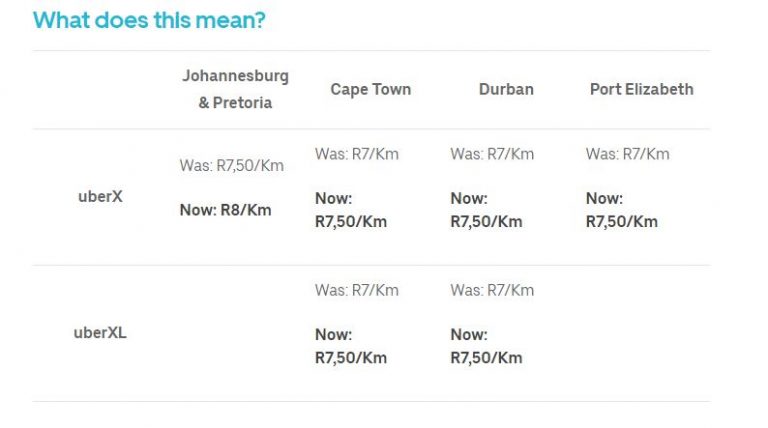 Here’s what people had to say about Uber bus:

Dear @Uber_RSA, keep this in Egypt. In Mzansi, This Will Not End Well! pic.twitter.com/YBi6W1ha0I

Want to commit suicide but don't want to rob your family off that insurance money???? Just order #Uberbus in SA pic.twitter.com/ATalpy3nIj