Four years after being revealed as a concept, the Tarok now appears more than ever not becoming a production reality. 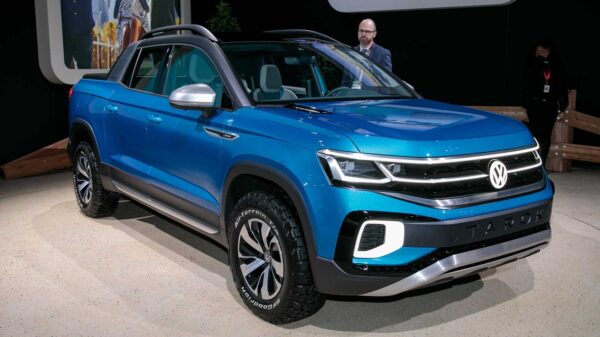 Four years after bowing as a concept, the Tarok has once again been ruled-out from becoming a reality. Image: motor1.com Brazil

Volkswagen has once again ruled the possibility of the Tarok bakkie entering production despite having previously hinted it could become a reality by 2024.

The second delay after being axed in 2020, only for an apparent reversal to occur months later, the Tarok had been tipped to enter production at the General Pacheco plant in Argentina, plans that now appear to have been scrapped despite Volkswagen announcing a $250-million investment into the facility this week.

“The Tarok compact pickup is a beautiful project, but today it is impossible to make it in Argentina. (Production of it) is humanly and technically impossible,” motor1.com Brazil quoted Volkswagen’s President for Latin America, Pablo Di Si, as saying at the investment announcement.

In a surprise turnaround, Di Si confirmed that most of the investment will go towards production of the next generation Amarok, though more than likely only for Latin America after it was confirmed in 2020 that production for key markets would be transferred to Ford’s Silverton Plant outside Pretoria.

The unexpected u-turn, also motivated by Volkswagen’s decision to build the Taos at General Pacheco for South America, has seemingly served as the final blow for the Tarok after Di Si confirmed that the São Bernardo do Campo plant in Brazil would build the Polo Track once production of the model it replaces, the Gol, ends next year.

In addition, production in North America has been denounced despite interest being shown in a possible rival for the Hyundai Santa Cruz, Ford Maverick and Honda Ridgeline.

“If you look at what Volkswagen did with the Rabbit/Golf, with the Jetta, those segments really drained, it got significantly smaller. Could we bring that back to life with a pick-up/lifestyle vehicle? I think we could and we will look at those opportunities,” Wolfsburg’s North American President and CEO, Scott Keogh, said back in 2020.

Shown in concept form four years ago, the Tarok has long since been billed as the replacement for the ageing Saveiro, with Volkswagen, at the time, branding it as a world vehicle capable of being offered with left-and-right-hand-drive.

Based on the same MQB-A0 platform as the Polo and Nivus/Taigo, the concept utilised motivation from either a flex-fuel version of the 1.4 TSI or a 2.0 TDI, the latter being the biggest hint of exportation outside of Latin America.

Called 80% ready at the time of the concept’s launch, the Tarok has been expected to rival the Fiat Toro/Ram 1000, Maverick, Renault Oroch and Chevrolet’s incoming all-new Montana, though this now appears unlikely given Di Si’s comments.