Once one of the most populace and important segments in the United States, now officially only occupied by five models, the downturn in large MPV sales has not deterred Toyota from unveiling the all-new fourth generation Sienna.

The fourth best-selling model in its class last year with 73 585 units moved, the latest Sienna represents a radical departure from its predecessor stylistically, with Toyota citing Japan’s famous Bullet Train as inspiration. Taking sales cues from not only the Lexus LS in the shape of the lower air intake, but also one of its rivals, Chrysler Pacifica in the silhouette department, the Sienna nonetheless appears fractionally longer than the offering from Windsor, Canada, with Toyota also claiming that the “swagger wagon” denotation applied to the previous Sienna, had been taken a step further.

Based on the TNGA-K platform, the Sienna comes as standard with eight seats but can be specified with seven in the shape of two so-called super long slide captain’s chairs in the second row with ottomans featuring on some models. In addition, the Sienna also introduces what Toyota refers to as the bridge, namely the centre console which boasts an open storage area underneath.

In the States, five trim levels are offered; LE, XLE, XSE, Limited and Platinum with notable equipment, depending on the selected grade, consisting of a nine-inch touchscreen infotainment system with Apple CarPlay and Android Auto, up to seven USB ports, an optional digital rear-view mirror plus a rear entertainment system with two 11.6-inch screens and wireless headphones, quad-zone climate control, heated second row, 20-inch black alloy wheels on the XSE, a 1 500-watt power inverter from the XLE and up, a wireless smartphone charger and a ten-inch colour Heads-Up Display on the Limited. As well as a seven-inch instrument cluster display, additional items consists of an on-board vacuum cleaner, kick-motion opening dual sliding electric doors, an electric steering column featuring an heated steering wheel, a refrigerator, electric tailgate and a choice of  three sound systems; the standard six-speaker reserved for the LE, an eight-speaker that comes as an option but which is standard on the XLE and XSE and finally, a 12-speaker, 1 200-watt JBL Premium Audio that follows a similar method of availability by being a cost option on the latter pair, but standard on both the Limited and Platinum. 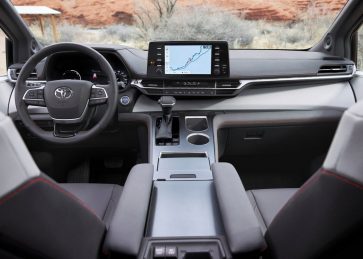 In addition to its new platform, the Sienna follows the revived Venza in being a hybrid model only as Toyota has replaced the 221 kW 3.5-litre V6 petrol engine and eight-speed automatic gearbox with a 2.5-litre four-cylinder hybrid that sends 181 kW to the front or all four wheels depending on the trim level via CVT. A first for any generation Sienna, the newcomer also sports a drive mode selector with four settings; EV, Eco, Normal and Sport.

Going on sale later this year, pricing for the Princeton, Indiana-built Sienna has not yet been revealed, but unlike the Previa which it replaced in 1997, chances of it coming to South Africa are non-existent.