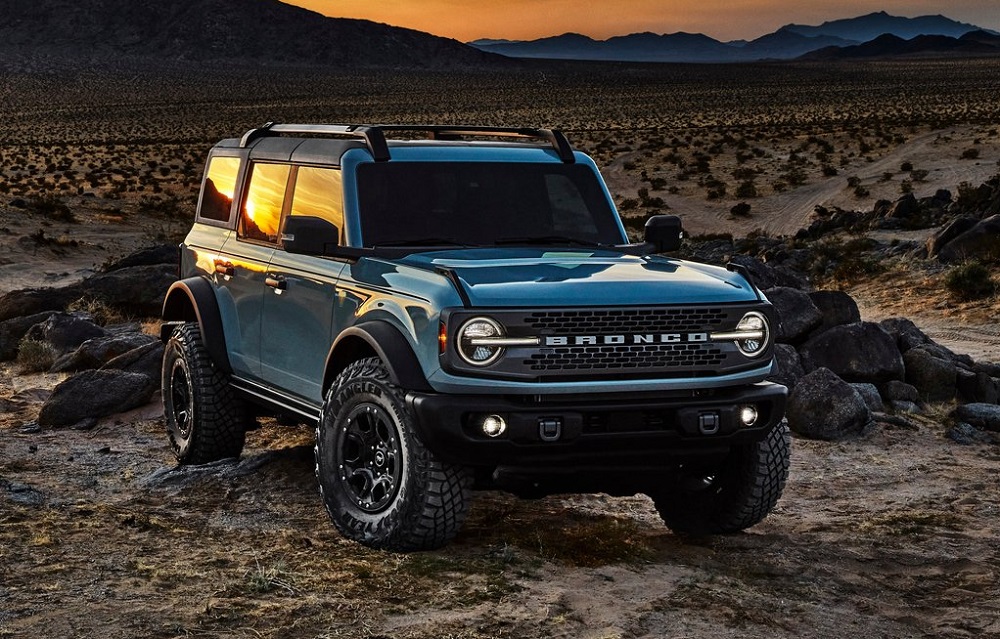 Announced back in 2017 that it would be revived after going out of production in 1996, Ford, after countless spy images, renders, leaked details, speculative reports, pre-production images and even a botched launch date that coincided with the birth of OJ Simpson, officially unveiled the all-new Bronco and the more lifestyle focused Bronco Sport in the early hours of Tuesday morning (14 July).

Available for the first time with either two or four doors, the Bronco is aimed directly at the Jeep Wrangler and according to Ford CEO Jim Farley, incorporates the “toughness of an F-Series truck and performance spirit of Mustang”. 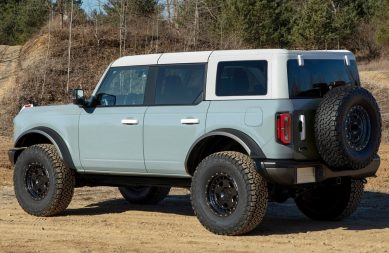 Based on the same T6 platform as the Ranger, Everest, the Ranger Raptor and the North American Ranger, the Bronco boasts a retro design heavily derived from the 1965 original with cues such as the round, albeit LED, headlights, the same compact appearance in the case of the two door and short front as well as rear overhangs. 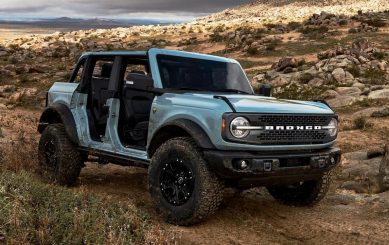 In a direct swipe to the Wrangler, the Bronco comes with a conventional hard-top roof, which can be removed completely in four sections on the four-door, while that of the two-door can be detached in three sections.  A soft-top is however standard on the former, but can be swapped for the metal cover as an option. Regardless of the roof, both models’ doors can be removed with the four-door offering on-board storage plus four protective bags.

The biggest emphasis though has been underneath its skin where the chassis has been made out of high-strength steel and an independent suspension layout utilised at the front, while the rear features a solid axle with coil springs. Bilstein supplied dampers star all around along with a segment first semi-active hydraulic stabiliser bar the Blue Oval says will disconnect in order to provide “maximum articulation and increased ramp angle index for off-camber terrain”. 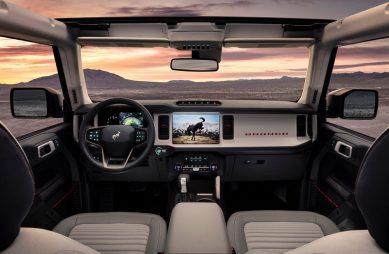 All models also feature 35-inch off-road tyres as an option, a ground clearance of up to 295 mm, a wading depth of 850 mm, departure angle of 37.2 degrees, a breakover angle of 29 degrees and two four-wheel-drive systems; a standard electronic shift-on-the-fly and a more high-tech system with a two-speed electromechanical transfer case that comes with an auto mode, a Dana 44 AdvanTEK rear axle plus a AdvanTEK independent front. 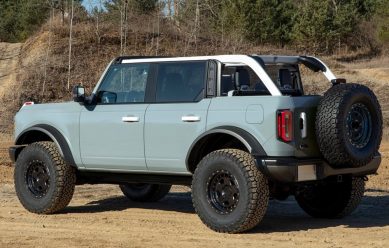 An electronic diff-lock comes standard with Ford offering  seven driving modes from the Terrain Management system it has as dubbed G.O.A.T or Go Over All Terrain settings; Eco, Normal, Slippery, Sport and Sand plus three dedicated off-road settings; Mud/Ruts, Rock Crawl and like on the Ranger Raptor, a Baja mode. As ever, buyers can choose from a range of accessories ranging from rock sliders to grilles and even steel bumpers.

Inside, the Bronco’s interior is not dissimilar to that of the Wrangler, but has been designed from the ground up with either an eight or twelve-inch touchscreen SYNC 4 compatible infotainment system, a digital instrument cluster display, washable rubber floors with drain plugs, silicone rubber coating on the dashboard and even rubber touch points able to protect against water and dirt. A surround-view camera system is optional together with Rollover Stability Control and Trailer Sway Control. 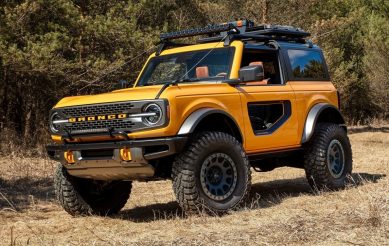 In North America, six trim levels will be offered; base, Big Bend, Black Diamond, Outer Banks, Wildtrak and Badlands with a choice of two engines; the same 200kW/420Nm 2.3 EcoBoost as the US-spec Ranger and the 2.7 EcoBoost V6 from the F-150 adapted to produce 230kW/542Nm. 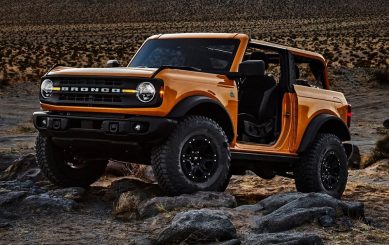 Although equipped with the equally well-known ten-speed automatic gearbox co-developed with General Motors, the Bronco also offers a six-speed manual supplemented by a crawler gear when going off-road, making it one of the few vehicles on sale today to come with an effective seven-speed manual. 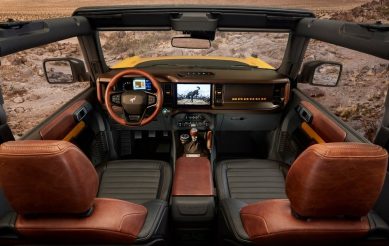 Production will take place at the Wayne Plant in Michigan alongside the Ranger, but despite recent reports suggesting right-hand-drive availability, Ford Motor Company Southern Africa Managing Director, Neale Hill, at the unveiling of the facelift Mustang last year, remarked that, “the way the Bronco programme has been set-up right now is that it is a left-hand-drive product aimed at the North American market for now”.