Despite being a concept, expect little of the interior or exterior to be toned down when sales commence next year. 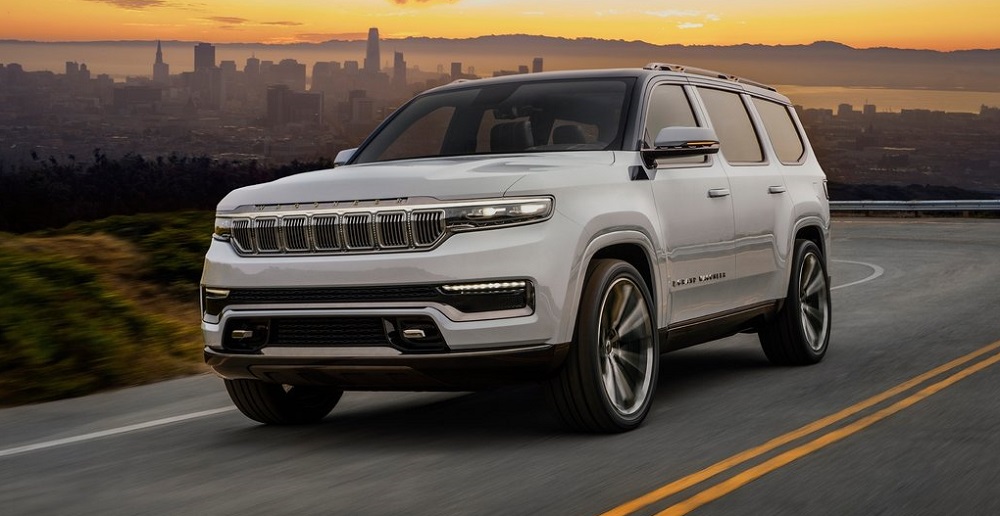 Initially planned for introduction in 2018 but delayed until 2020 and then 2021, Jeep, after a slew of rapid fire teaser images last month, has officially revealed the concept Grand Wagoneer and with it, the revival of one of its most iconic monikers created.

Despite being billed as a concept, the long awaited replacement for the Commander, and the first Jeep to wear the Grand Wagoneer name since 1991, appears near production ready ahead of its arrival on dealership floors from the second quarter of next year.

Set to be built alongside the Ram 1500 at the Warren Assembly Plant outside Detroit in Michigan, the boxy Grand Wagoneer takes styling inspiration from not only the Chinese market Grand Commander, but seemingly also the Land Rover Discovery when viewed from the, albeit without the off-centre cues. 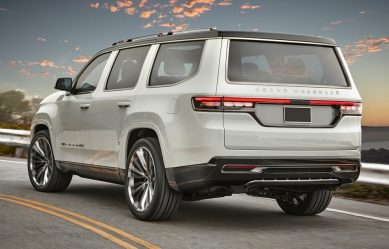 Complete with block ‘Grand Wagoneer’ letting underneath the square rear window, a distinctive V between the LED lights and a light bar almost running across the tailgate, the front facia of the Grand Wagoneer pays the biggest tribute to original in the form of a chromed and concaved seven-slot grille, thin projector-type LED headlights, a logo bar with block Wagoneer scripting above the grille and copper Grand Wagoneer badging at the base of the doors next to an American flag.

Finished in two-tone Arctic White with an Obsidian Black roof, the concept sits on Obsidian finished aluminium multi-spoke 24-inch wheels with a suspended three-piece acrylic Wagoneer centre cap, and further comes with a discreet diffuser integrated into the rear bumper, an LED ‘welcome’ sequence when the doors are unlocked and a full panoramic glass roof.

Inside, the concept boasts no less than five separate displays in forming part of an interior design and look not seen in any current Jeep. Appearing futuristic and again, production ready, the digital instrument cluster measures the ubiquitous 12.3-inches, while the upper part of the facia is dominated by a 12.1-inch UConnect infotainment system with Fiat-Chrysler Automobiles’ (FCA) latest Uconnect 5 software, and at the bottom, a 10.25-inch screen Jeep has dubbed the Comfort Display that rates as the interface for the quad-zone climate control as well as the electric seats. 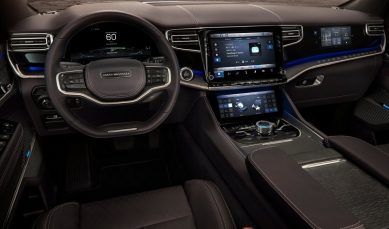 As on the Porsche Taycan, a 10.25-inch screen is located on the passenger side while those seated in the rear have access to a 10.1-inch system mounted centrally. Providing seating for seven or six with the second row captain’s chair option, the interior comes resplendent in sustainable materials in the form of synthetic “leather” known as PUR, a recyclable micro-fibre suede headliner, 3D wood inlays, raw aluminium on the doors and indeed the material for the rotary gear lever, heat-treated lacework, onyx glass inserts and, in a nod to the original, a two-spoke steering wheel and EST. 1963 script engraved out of aluminium on the dashboard.

In yet another first, the Grand Wagoneer is fitted with a 23-speaker sound system made by specialist audio firm McIntosh, which signals its first every foray into the automotive segment. Custom-made, the speakers are backed-up by a 24 channel amplifier. 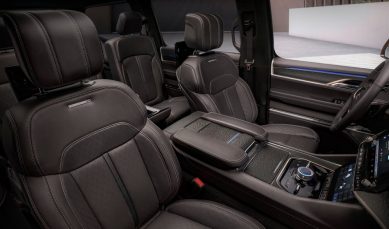 Underneath the bonnet, Jeep has indicated that the production Grand Wagoneer will have a “no-compromise plug-in hybrid electric vehicle powertrain”, but declined to provide any technical details. Despite being based on the Ram 1500’s platform, the Grand Wagoneer is unlikely to offer the 2.0-litre plug-in hybrid powerunit from the Grand Commander, and could instead feature a PHEV version of the 3.6-litre Pentastar V6 and/or the 5.7 Hemi V8.

In addition, Jeep’s Quadra-Lift air suspension system is included along with no less than three four-wheel-drive system and “unmatched towing capability”. Full specification, along with the drivetrain options, which could potentially include an SRT model, will be announced only when or before production kicks-off. 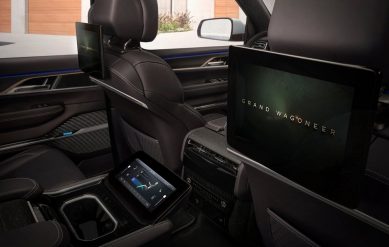 With it being reported earlier this year that a different model would be offered in right-hand-drive markets, chances are that the Grand Wagoneer will be a left-hand-drive only model and therefore a no-no for South Africa when it goes on sale, but at present, this has not yet been confirmed outright.