Kiger will go on sale in next year with the same normally aspirated or turbocharged 1.0-litre engine as the Magnite and Triber.

Renault, after an extensive launch delay due to the Coronavirus, has officially revealed the concept version of the Kiger in India that will go on sale next year.

Essentially the twin of the Nissan Magnite, the concept is said to be 80% representative of the production model with the front facia being derived from the Triber and Kwid, traits which come as no surprise given that the CMF-A+ platform on which it is based, is spun-off from the CMF-A used by the latter. 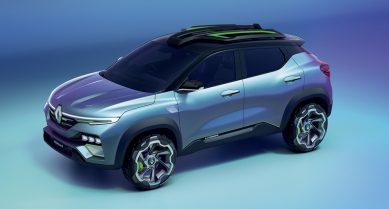 Sporting a silhouette seemingly similar to the discontinued Citroën C4 Cactus when viewed from the C-pillar back, the Kiger boasts thin LED headlights connected by a single, equally thin, light strip broken up only by the diamond logo, as well as oversized 19-inch alloy wheels, green accents, a three block design for the front bumper mounted LED daytime running lights, cladding around the wheel arches, C-shaped LED taillights, floating roof rails and a prominent faux rear diffuser with green detailing.

Despite not revealing the interior, the Kiger is likely to be similar to the Magnite in terms of design and layout, as well as standard specification. The same goes for the drivetrain where two versions of the 1.0-litre three-cylinder petrol engine are likely to be offered; the 52kW/96Nm normally aspirated unit and the 74kW/160Nm turbo. Drive will go the front wheels only via the standard five-speed manual transmission or the optional CVT. 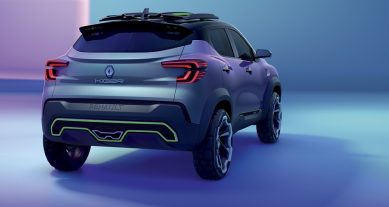 Whereas the Magnite has been confirmed for introduction on 26 November in India with sales in South Africa commencing next year, the Kiger is forecasted to arrive in production spec either next month or in early 2021 before going on sale soon after. At present, no word about local market availability has been made.