Newly named all-electric EQB will have a 419 km range and output of 200 kW. 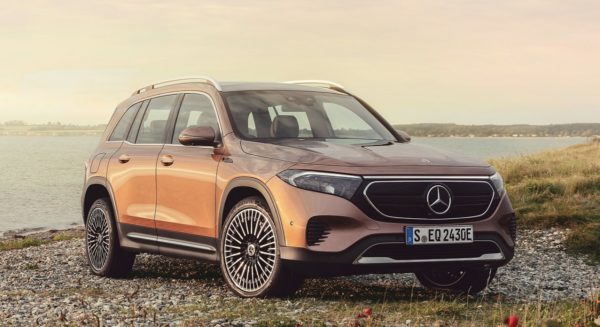 Like the EQA based on the GLA, the GLB derived EQB receives a EQC inspired front end

Mercedes-Benz has expanded its all-electric EQ moniker to the GLB after unveiling the GLA-based EQA in January this year.

Largely aimed at the Chinese market, the EQB follows the same route as its mentioned sibling by differing from the standard model only on aesthetics while retaining the same basic silhouette.

Rear facia has also been revised from the GLB

Measuring 4 684 mm in overall length with the wheelbase coming to 2 829 mm, height to 1 667 mm and width to 1 834 mm, the EQB receives a restyled front facia as seen on the EQC and a redesigned rear-end made up of the numberplate being relocated to the bumper and a full-width bar between the taillights.

Carrying the EQB 350 moniker, the newcomer rides on 20-inch alloy wheels in the case of the AMG Line derivative and like the GLB, offers a choice of five or seven seats. Claimed boot space is rated at 495-litres or up to 1 710-litres in the former with space in the latter being between 465 and 1 620-litres.

Inside, the interior is carried over from the GLB with an array of materials and colours being available from the options list. While the dual 10.25-inch instrument cluster and MBUX infotainment system feature, both come with specific dials and readouts unique to the EQB in order to conform to the new propulsion unit up front.

Although Benz’s didn’t divulge exact details of the Chinese model, apart from confirming an output of 215 kW, it did reveal specification of the European-spec EQB that will become available towards the end of this year. Compared to the exterior, the EQB’s interior is largely unchanged from the GLB

As indicated, the EQB will initially be offered only in China before going on sale in Europe and North America with pricing to be announced later. However, don’t expect it to become available in South Africa soon.