Rumour true: Honda Integra back in 2022

As before, the Integra name will be used by Honda's upscale Acura division in the United States. 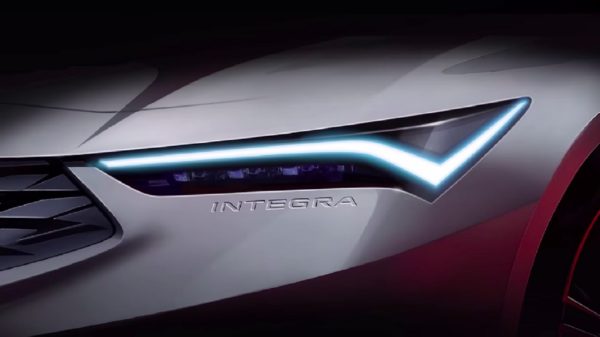 Teaser of the new Honda Integra that will once again be marketed as an Acura in North America.

With the rumour having emerged last year, Honda – via its upmarket Acura division in the run-up to the unveiling of the new NSX Type S this past weekend in California – confirmed that the much loved Integra nameplate will be making a comeback next year after bowing out in 2006.

Despite declining to go into any details about the Integra, the automaker did provide a first glimpse in the form of a single teaser image showing the LED headlight and part of the grille, which bears a resemblance to that of the second-generation Honda Accord-based Acura TLX that debuted in North America last year.

Reportedly set to be based on the same platform as the Civic, the Integra will likely be offered once again as a sedan and a coupe, the latter poised to replace the now-departed Civic Coupe in line with the recently revealed model being offered only as a sedan or hatch.

For now, little else is known about the newcomer that spawned the iconic, third-generation and Japanese-market-only Integra Type R and the proceeding fourth-generation coupe-only Integra DC5/Acura RSX, but chances are that details will emerge over the coming weeks and months.

In a subsequent tweet, Acura confirmed that the Integra would make its return in the US spring of next year, meaning a unveiling between March and May. As with previous generations though, the Integra is unlikely to be offered in South Africa.