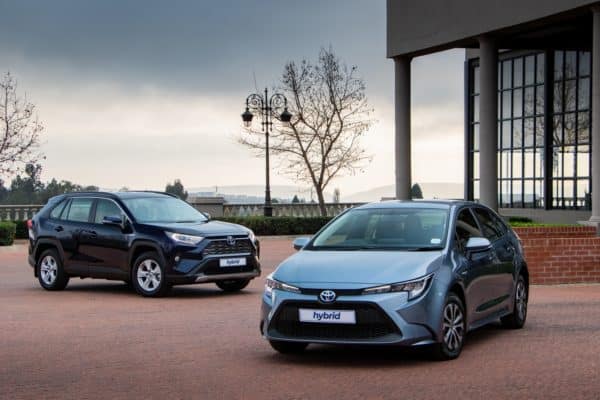 Corolla and RAV4 joins the Prius in the Toyota's local hybrid line-up.

With hybrid motivation set to feature on all of its models by 2025, Toyota has upped its electrified offerings in South Africa to three with the addition of dual engine versions of the Corolla Sedan and RAV4.

Joining the Prius, the “h” UX, IS and EX versions of upscale sister brand Lexus, and soon the locally build Corolla Cross, both models, surprisingly, are offered in mid-range trim levels rather than serving as flagship variants as a way of making hybrid access more affordable.

Based on the conventional Xs model, the Corolla Hybrid, bar the inclusion of Hybrid badges and blue accents, differs comparatively little from its petrol sibling externally as most of the changes have taken place underneath.

Riding as standard on specifically optimised low rolling resistance wheels wrapped around model bespoke 15-inch alloy wheels, the Hybrid uses the same 1.8-litre petrol engine as the Prius, combined with an electric motor for a total system output of 90 kW.

Paired to a CVT with drive going to the front wheels as usual, the Corolla Hybrid has a claimed top speed of 180 km/h and will according to Toyota, will consume 3.5 L/100 km with the added claim of a combined range of 1 200 km.

In terms of features, the Hybrid, like the normal Corolla Xs, come as standard with auto on/off LED headlights, heated electric mirrors, LED daytime running diodes and cruise control in addition to the following:

For the RAV4, Toyota has opted for the GX derivative that sits below the mid-ship GX-R and the top-spec VX.

Like the Corolla, the RAV4’s exterior hybrid transformation is limited to hybrid badges and blue detailing with power coming from the same 2.5-litre petrol engine as the latter, albeit boosted by an electric motor for a combined output of 160 kW.

Considerably down on the 221 kW plug-in hybrid Prime offered in the United States and Europe, but 28 kW better off than the conventional VX, the hybrid swaps the latter’s eight-speed automatic gearbox for a CVT with drive going to the front wheels instead of all four. Fuel consumption is rated at 4.7 L/100 km with Toyota claiming a top speed of 200 km/h.

Specification-wise, the RAV4 Hybrid comes as standard with 17-inch alloy wheels, a six-speaker sound system and roof rails as well as the following: