Twin of the Fiat Toro will be marketed in certain Latin American markets where the Ram name is better known. 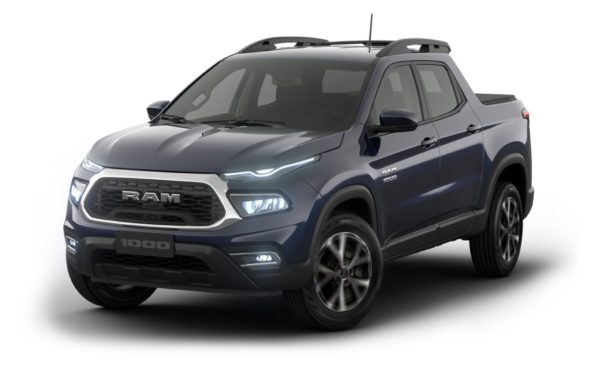 Bar a new grille and block letter badging, the Ram 1000 is otherwise identical to the Fiat Toro.

Having earlier this year debuted the Ram 700 based on the new Fiat Strada for markets in Latin America, Stellantis has followed the same approach with the bigger Ram 1000 spun-off of the facelift Fiat Toro.

Build in Brazil but shipped to various markets in South America as part of the Ram line-up below the full-size 1500 model, the 1000’s visual differences from the Toro comprise a tweaked grille with block letter RAM badging and the RAM horns logo in place of the Fiat badge in the centre of the barn-door split opening tailgate.

Like the Toro, the Ram 1000 is based on the then Fiat-Chrysler Automobiles (FCA) developed Small Wide 4×4 platform used by amongst others, the Jeep Compass, Renegade and revived Commander, as well as the Fiat 500X with its interior revisions consisting of RAM logos on the steering wheels and on the seatbacks.

According to reports, the Ram 1000 will make landfall first in Colombia where only a single trim level will be offered, the range-topping Big Horn which, unlike the Toro, continues with the old 1.8 e.TorQ Evo petrol engine Fiat had co-developed with General Motors over a decade ago.

Producing 96kW/170Nm, the normally aspirated four-pot is connected as standard to a six-speed automatic gearbox with drive going to the front wheels only. At present, no plans are in place to offer the 1000 with four-wheel-drive or the engines utilised by the Toro in Brazil.

As with the Toro, the Ram 1000 won’t be offered outside of Latin America, meaning a no-no for right-hand-drive markets.