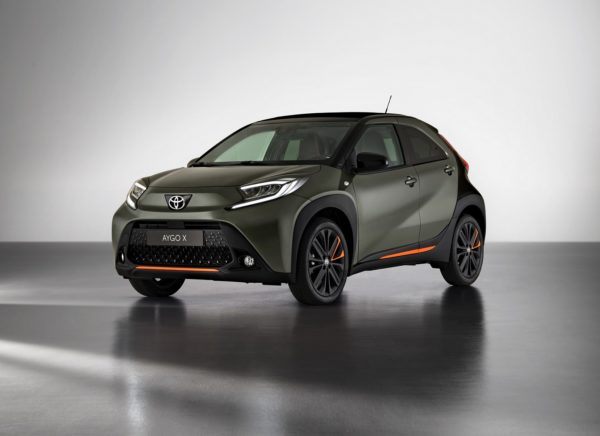 Funkiness remains, but now with a crossover flavour.

The announcement made back in March and the concept shown not long after, Toyota has taken the wraps off of the production version of the all-new Aygo, now called the Aygo X.

Toned down marginally from the Aygo X Prologue concept, the now suffix-less Aygo X introduces a number of firsts to the nameplate, the biggest being production that now takes place in-house.

No longer reliant on Stellantis after the marque announced its departure from the shrinking A-segment last year, the Aygo X, while still made in the same Kolín factory in the Czech Republic as the previous two generations, no longer comes with a pair siblings in the shape of the Citroën C1 and Peugeot 107/108.

With Toyota’s takeover of the former BZero products facility, the X moves to the GA-B platform that underpins the Yaris XP150, with its dimensions being 3 700 mm in overall length, a wheelbase of 2 430 mm, height of 1 525 mm and width of 1 740 mm.

Compared to its predecessor, the X has grown significantly in that it measures 235 mm longer overall, 90 mm longer in length and 125 mm wider. Height meanwhile has gone up by 65 mm with Toyota claiming a 60-litre improvement in boot space for a total of 231-litres with the rear seats up.

As evident by its name and the concept, the Aygo X now sports a crossover-type look, albeit with a number of minor changes as mentioned.

Styled by Toyota’s European Design Centre in France, the X retains the wheel arch cladding, resplendent in conventional black plastic rather than the gloss black used on the Prologue.

Also retained is the bi-tone body colour option that extends from the roof down the C-pillar all the way to the arches, the kink in the mentioned pillar, lower front air intake and the boomerang-esque taillights.

Available with either 17 or 18-inch alloy wheels depending on the trim level, the five-door only Aygo X differs from the concept in the design of the upper front facia. While the LED headlights continue, they no longer extend around the base of the grille in a wraparound style.

Instead, they feature a conventional design with the sealed grille itself being similar to that of the long since departed iQ.  Also gone are the flush door handles replaced with conventional ones and the cameras integrated into the side mirrors.

As before, the Aygo X will be offered with a retractable canvas roof Toyota says has been enlarged by 40 mm over that of the Aygo X-Cite. New for the soft-top is a wind deflector as well as claimed improved water and dust protection.

Not seen with the concept, the Aygo X’s interior is all-new with the emphasis being on younger, tech-savvy buyers.

This means the fitting of items such as a four-speaker, 300-watt JBL sound system, a wireless smartphone charger, ambient lighting and a newly designed nine-inch touchscreen infotainment system with over-the-air-updates, Apple CarPlay and Android Auto.

While available with a series of colour packs for certain interior trim pieces, the Aygo X’s main, and somewhat puzzling, specification carryover from its predecessor are the pop-out rear windows instead of manual or electric items.

Up front, and in a turnaround from the segment’s growing switch towards electrification, the Aygo X retains internal combustion motivation thanks to the long serving 1.0-litre three-cylinder petrol engine.

Going on sale across Europe from early next year, the Aygo X won’t be returning to South Africa following its replacing earlier last year with the Indonesian made Agya.