Eventual product line-up will grow to 30 with Lexus becoming electric only after 2030. Toyota, after an apparent slow start, has launched its electrification strategy with the unveiling of 16 all-electric models due out over the coming years.

Part of a massive investment of ¥1.5-trillion (R212-trillion) into battery vehicles, the eventual model line-up will grow to 30 vehicles across the Toyota and Lexus ranges, with the latter going electric only in Europe, North America and China from 2030.

The brand, which kicked-off its electric switch last month with the reveal of the bZ4X, will also focus on carbon-neutral vehicles with Toyoda stating that it will “do our utmost to realise such vehicles”.

“The Toyota bZ means going ‘beyond Zero’. Freedom of movement and fun to drive for all. Our goal is not only to reduce CO2 emissions and other negative impacts to zero. Our goal goes beyond those,” he said.

According to Toyoda, the switch to electrification for Lexus will result in a “unique electrified” brand where the full potential of plugged-in technology will be utilised.

“Lexus has pursued unique styling and a unique driving signature, and, as a pioneer in hybrid electric technology, it has refined its electrification technology. And now, Lexus is embarking on a new chapter,” Toyoda continued.

“We believe that the Battery EV will become the future symbol of Lexus as a model that most clearly expresses the evolution of the automobile brought about by electrification”.

Aside from the bZ4X, which will spawn a Lexus derivative called the RZ early next year, the range of models include a Aygo X-sized small car, no less than three sports coupes – the Toyota variant seemingly previewing the long rumoured all-new MR2 – a C-HR-sized crossover and the production version of the FJ Cruiser inspired FT-4X that debuted at the New York International Auto Show four years ago.

Perhaps the most important is a new electric bakkie resembling the Tacoma, which could potentially provide a glimpse of what the next generation Hilux will look like.

Exact details of the respective models were not divulged, but expect this to change from next year. 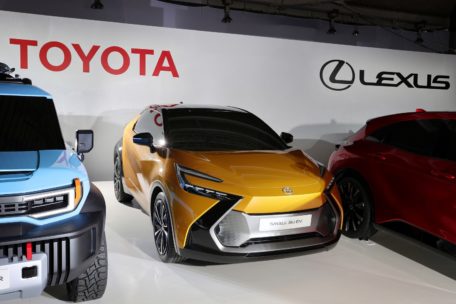 3/5
New electric hatch the size of a Corolla