Mid-life update likely to be one of the last in readiness for the Aircross's rumoured all-electric replacement in 2025. 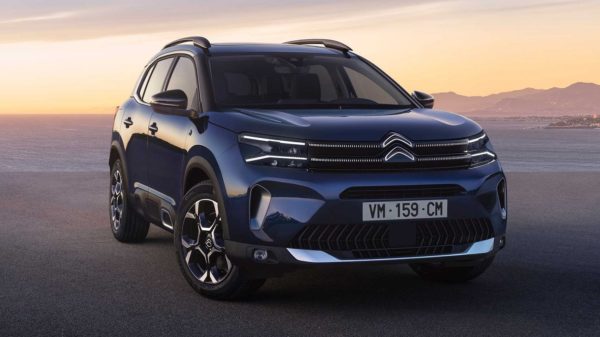 Changes to the front are apparent. Photo: Supplied

Reportedly facing the axe in favour of an all-electric model by 2025, Citroën has nonetheless followed Stellantis stablemates Peugeot and Opel/Vauxhall by introducing the facelift version of its C-segment crossover, the C5 Aircross.

Debuting less than a year after its refreshed siblings, the 5008 and renamed Grandland, the Aircross, which debuted back in 2017, receives a new split LED headlight arrangement derived from the C5 X, a new grille with illuminated LED bars, the bumper from the C5 X and a redesigned chevron logo.

The inclusion of the bumper means the departure of the squared-off air inlets in favour of thin vertical intakes, with another new design trait being a more prominent lower air intake and thicker bottom lip.

While the side profile remains unchanged, Citroën has freshened-up the C5 Aircross’s rear facia, albeit slightly, with new taillights equipped with equally novel LED graphics. Rounding the exterior off is a new 18-inch alloy wheel option.

The biggest change is to be found inside where the old eight-inch integrated touchscreen infotainment system makes way for the freestanding 10-inch display used on the C5 X. This means a redesign for the centre console plus new air vents.

Borrowing further from its sibling, the C5 Aircross also gains the Advanced Comfort seats that feature heating and massaging functions for driver and passenger, as well as toggle switches for the automatic gearbox in place of the previously used gear lever.

Underneath the bonnet, the line-up of power units remains unchanged with choices comprising two turbo-petrol units, a pair of turbodiesels and one plug-in hybrid.

In the case of the petrol, two versions of the long-serving PureTech family feature; the three-cylinder 1.2 outputting 96kW/230Nm and the bigger 1.6 rated at 133kW/250Nm.

Providing diesel motivation, the entry-level 1.5 BlueHDI delivers 96kW/300Nm, while the range-topping 2.0-litre develops 130kW/400Nm. Both are hooked to the eight-speed ‘box, though a six-speed manual is offered on lesser trim level versions of the 1.5.

Once again serving as the flagship unit, the plug-in hybrid combines the 1.6 PureTech with a front-mounted 13.2-kWh battery that powers an 80 kW electric motor. Total system output is 165 kW with the claimed all-electric range being 55 km.

Going on sale in Europe later this year, availability of the updated C5 Aircross has so far not been made for South Africa, but expect an announcement in due course or after the unveiling of the Old Continent market derivative.