Giniel de Villiers isn't the only local driver to drop back in the overall standings... 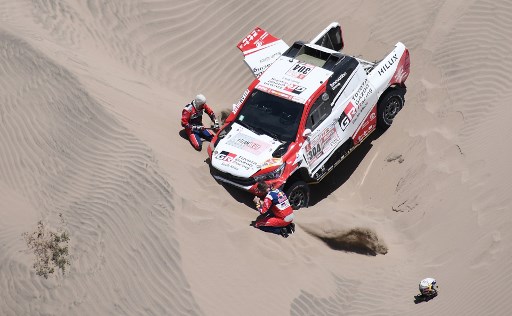 Toyota's driver Giniel De Villiers of South Africa and his co-driver Dirk Von Zitzewitz of Germany are pictured during Stage 4 of the Dakar 2018, in and around San Juan De Marcona, Peru, on January 9, 2018. / AFP PHOTO / FRANCK FIFE

Despite losing further ground on stage four, the Toyota Gazoo Racing SA team managed to stay in touch with the dominant Peugeot outfit on Tuesday by retaining three places in the top 10 at the Dakar Rally.

Dutch driver Bernhard ten Brinke was the fastest on the day for the local team, taking eighth place, though he was more than 40 minutes off the pace of Frenchman Sebastien Loeb (Peugeot) who was fastest over the 330km timed section in Peru.

It was a tough day out for South African contender Giniel de Villiers, who settled for 17th spot on the stage, dropping to eighth overall.

Meanwhile, Argentine driver Lucio Alvarez and South African navigator Rob Howie continued their impressive comeback after rolling their Toyota vehicle on day two, claiming seventh on the stage as they settled in 20th place in the standings.

All four SA riders were still in the race in the bike division, led by David Thomas who was lying 51st on his Husqvarna, though he was more than three hours behind French leader Adrien van Beveren.