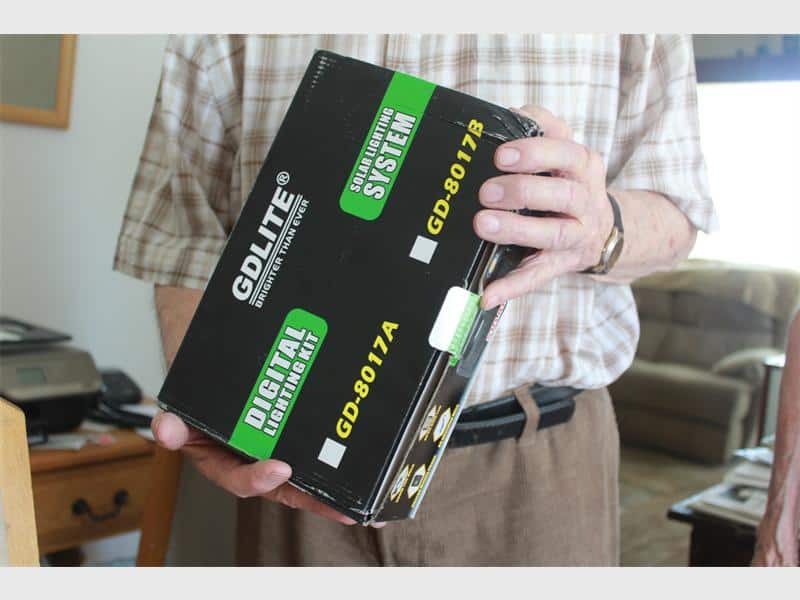 The 89-year-old husband holds the Digital Solar system which they were sold by a bogus City official.

Pensioners who were swindled to pay an amount of R9 300 by a man who claimed to be from the City of Johannesburg are warning other pensioners to be vigilant.

The deceived married couple from Blairgowrie, who did not want to be named for fear of embarrassment, claimed the man had all their details, including their bank transactions, Randburg Sun reported.

“He introduced himself as Carlos Naidoo and explained that there has been a lot of fraud in the City and, as a result, the City owed a lot of money to Eskom and the electricity utility was threatening to take over the Randburg area as far as electricity was concerned,” the 81-year-old wife said.

She said the man indicated that the City had worked out a special deal for pensioners, and from this, January all residents should be using prepaid electricity and will have to pay for the device that will be installed in their homes.

“He told us the City would pay for the meter outside the wall and the pensioner concerned will pay R8 500 for the inside meter,” she said.

The fraudster allegedly claimed these pensioners would not pay any municipal rates for the next three months.

“He said we would only start paying a reduced amount of R1 400 and refuse removal would be free. We paid him an amount of R450 for the digital solar system which would be installed in the house and a delivery cost of R150 as well as a registration fee of R200,” she added.

He allegedly instructed them to make out a cheque payment of R8 500 to Maarman, who was the installer but should not cross it, which they did.

“He then asked copies of our ID books and then went from room to room counting all the electric lights, presumably for the digital solar system,” she said.

On 28 December Naidoo did not arrive as promised, and when they called him, his phone was on voicemail.

“To date, I have not had a reply from that number – it’s always on voicemail,” she said.

City Power spokesperson Yumna Sheik said the utility’s contractors were expected to carry their identification cards with them at all times and each card has an expiry date.

“Customers need to know that contractor officials are not permitted to request cash payments for unpaid bills,” she said.

She stressed the importance of confirming officials and contractors through the utility’s risk control department before letting them on to premises.

“Customers are urged to only make payments at the City of Johannesburg and City Power walk-in centres,” she said.