The fourth body was burnt beyond recognition. Police suspect the woman could have been raped. 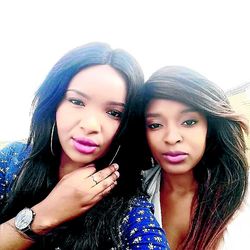 Bongeka Phungula and her friend Popi Qwabe. as they appear on a Facebook profile picture. The two were found murdered in Soweto at the weekend. /Facebook

Investigations are under way following the murders of four women who were found dead in open velds in Soweto at the weekend.

The body of Popi Qwabe, 24, was found in Naledi on Friday, while that of her friend Bongeka Phungula, 28, was found in neighbouring Tladi on Saturday, The Sowetan reported.

In another incident, the body of Lerato Moloi, a lesbian woman, was also found in Naledi on Sunday.

This after Tladi residents who were busy cutting the long grass stumbled across a shocking scene of the half-naked woman who was found lying in an open space, Soweto Urban reported.

Scene in which the body of the woman was found

Upon further investigations by police, it was found that there were big stones next to the head of the woman and she also had about three wounds on her neck and a knife was found next to her lifeless body.

The fourth body, which has not been identified was found at a dumping site in Mfolo, also on Sunday.

One of the police officers Captain Mavela Masondo said the fourth body was burnt beyond recognition.

“It is alleged that people who were at a dumping site came across the body and alerted police.”

Masondo added preliminary forensic investigations indicate that it is the body of a woman. The woman could have been raped.

“Two people have been arrested in connection with Moloi’s murder. The suspects will appear in the Pretoria Magistrates’ Court on Wednesday. The motive for the murder remains unknown,” said  Masondo.

He said the bodies of Phungula and Qwabe have been identified by family members. No arrests have been made.

In a Twitter thread titled #whydomenhateus, a user reacted with rage following the brutal deaths of the four women:

This happens to 54+ women per month and ppl are angry with the #WhyDoMenHateUs hashtag…. it's shocking. Just this weekend alone, 10 women.

We busy teaching women how to protect themselves, yet we not teaching our men how to act right!! #SAwomenLivesMatter #WhyDoMenHateUs

This is really a display of hatred. #MenAreTrash #WhyDoMenHateUs https://t.co/0rUZDJoqxy

#WhyDoMenHateUs #SAWomenLifesMatter Dear God please protect our women. .This country needs to take a break for a few years.

Death penalty must come back for these monsters, products of satan that are busy raping, killing, #SAwomenLivesMatter #WhyDoMenHateUs