The golfers paused the game and sat to watch the amazing sighting. 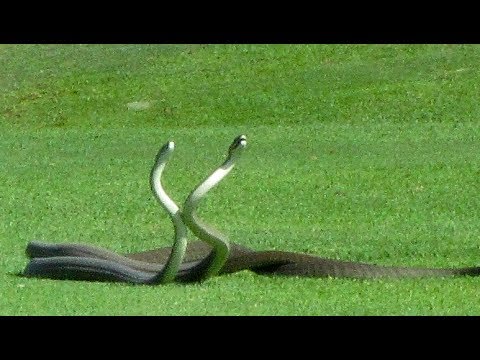 The rare sighting of the snakes fighting

One of the golfers, Cara, said: “I drove up a small rise and saw movement out of the corner of my eye. At first glance, I thought it was a spitting cobra that had its hood up, but after a closer inspection, I then saw it was actually two mambas.

“I quickly flagged the other two players in my 4 ball to slow down.”

Cara and the rest quickly realised that this was quite a rare sighting, so they paused the game and sat and watched the amazing sighting, Lowvelder reported.

“We called the 4 ball behind us to also come and watch. I called my husband, who was at the house to bring our son, to come and see too.”

Cara added: “It was amazing to watch and seemed to go on for ages.

“We debated about carrying on playing the hole, but after a little while longer, we decided to drive past them at a wide berth and go to the next hole.”

Just after the group had gone past the snakes that were going at it on the golf course, the snakes started looking a bit tired, they separated and slowly made their way back to the bush on the left-hand side of the hole.

Cara said: “We found concentrating on golf quite difficult over the next few holes. I feel this was a once in a lifetime sighting. And so always make sure you have a camera on this golf course, there is always something exciting that can happen. I just wish I would have I had a better camera with me.”