Service delivery demonstrations have escalated in Gauteng in recent months. 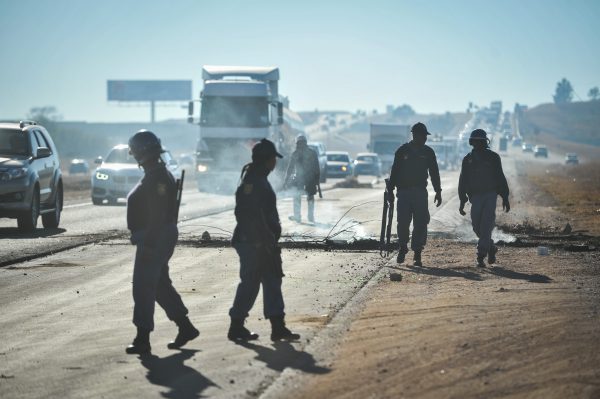 Police officers are seen walking along the N14 highway near Diepsloot where residents took to blocking the roads and highway during a service delivery protest, 10 July 2017, Johannesburg. Picture: Jacques Nelles

Since March this year, many parts of Gauteng have been hit by service delivery-related protests, mostly in the south of the province.

Yesterday, Mamonyane said that recently JMPD officers have been going to between four and five community protests daily.

“The protests, which have mainly been about service delivery and land invasions, have had a negative effect on our day-to-day operations.

“We have had to divert some of responsibilities from the roads, as well as fighting crime,” she said.

Last week, the areas affected by protests included Meyerton, in Midvaal, where residents of the Sicelo informal settlement barricaded the busy R59 highway with rocks and burning tyres.

Not far from there, residents of Cosmo City blocked off the old Vereeniging road, the R82.

In Lenasia, residents were also engaged in similar demonstrations as were those in parts of Soweto.

Yesterday, some Diepsloot residents were struggling to get from their homes to work after protesters barricaded the N14 highway and the R511.

According to Mamonyane, yesterday’s protest, which started at 4am, was about electricity and water.

“Since March, we have seen protests spreading to different parts of the province and that has put a strain on our daily operations,” Mamonyane said.

Some other areas that have been affected since March are Ennerdale, Sebokeng, Boipatong and Eldorado Park, all in the south.

Others closer to Johannesburg that have been the site of protests included Roodepoort, Alexandra and Marlboro.

Meanwhile, Metrorail in Gauteng announced that the suspension of train services between Vereeniging and Johannesburg has been lifted following violent protests near Midway, where two lives were lost, including that of a security official.

Train operations along that line resume today, but only between Vereeniging and Midway.

“Commuters are requested to take note that it is still unsafe to operate trains between Midway and Johannesburg.

“All relevant stakeholders are working with community leaders in Klipspruit to ensure the situation improves in the interests of fully restoring the service to normal,” Metrorail said in a statement.

Pit latrines, bad roads and no tap water but Limpopo villagers have multi-million rand community halls
20 hours ago
20 hours ago

Pit latrines, bad roads and no tap water but Limpopo villagers have multi-million rand community halls
20 hours ago
20 hours ago