They burned some of the property of the families, while members of the Metro police looked on. 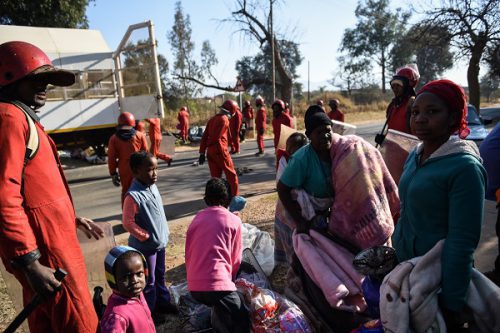 Residents from a small farm in Capital Park during the second eviction by the red ants, residents have yet to be relocated to a new home, 20 July 2017, Pretoria. Picture: Jacques Nelles

It was a heart-breaking scene yesterday as the Red Ants again pounced on the 48 families in Behrens Street, in Capital Park, in Pretoria, and broke down shelters and burned property.

These families had been living on the land of their former employer, a vegetable farmer, for 30 years.

The Red Ants, some armed with rifles, demolished the shelters the Economic Freedom Fighters (EFF), under the leadership of Joyce Leope, chairperson of ward 58, built on Tuesday night. The three tents the families also used as shelter were removed.

They also burned some of the property of the families, while members of the Tshwane Metro Police Department looked on.

Some of the residents were bullied to get into a bus and were taken to Lotus Gardens, about 30km west of the Pretoria City Centre, where they slept outside in the open veld surrounded by their possessions.

Thapelo Mogale, a member of the Capital Park community, said the containers with the fence around them was a duplicate of Blikkiesdorp in Delft, Cape Town. It looked like a concentration camp.

“The people are not opposed to moving, they just want to be given their own stand,” he said.