In Mamelodi, twin babies were found dead at an illegal dumpsite in June. 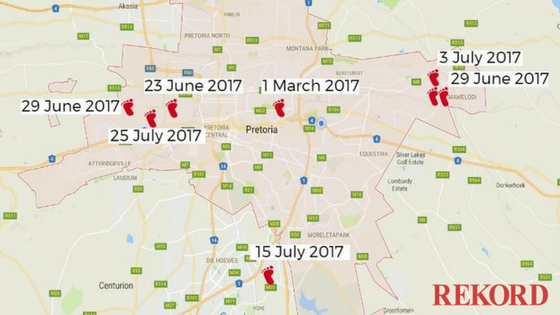 At least nine – and possibly more – babies have been found abandoned in public spaces in the first seven months of this year. Some were left alive, Centurion Rekord reports.

It has been reported that some of the cases that had occurred across the city – most were in Mamelodi.

In Sunnyside, two babies were found abandoned, one in January on Cilliers Street and another in April on Vos Street. And in March a foetus was discovered in a dustbin in Queenswood in the Moot and May saw the discovery of a baby dumped on a pavement in Soshanguve.

In Mamelodi, twin babies were found dead at an illegal dumpsite in June, when a man who was looking for scrap metal stumbled across them.

Police spokesperson Captain Johannes Maheso said the man informed the police and a case of concealment of birth was opened.

A witness claimed that six more abandoned babies were discovered in the very same dumpsite.

In July, another dead baby was found in Mamelodi East next to Balebogeng Primary School, while one was abandoned in a dustbin in Olievenhoutbosch. The baby was left overnight, but was found alive and received treatment for hypothermia.

Also, another foetus was dumped in a dustbin in Danville, Pretoria West, early in July this year

On Monday another foetus was found in a dumpster also in Pretoria West.

Netcare 911 spokesperson Nick Dollman said the foetus was still attached to her placenta when it was discovered in Pretoria Gardens.

“The baby was found wrapped in several plastic bags in a dumpster,” said Dollman.

New BeginningZ is an NGO that assists mothers who find themselves unable to look after their newborn babies.

Its director, Tahiyya Hassim, said: “The organisation was established in 2001, and based in Laudium. It offers services across Gauteng. New BeginningZ was started in honour of my baby boy Zameer, who passed away in a car accident (hence the capital Z in New BeginningZ).”

The NGO offers a variety of services including safety for children and the youth. It is also a crèche and provides after-care service, and services such as community assistance programmes, prevention and adoption assistances and others.

With a staff of 24, Hassim said her job was to ensure that once a baby was handed over by their mother, the child was guaranteed safety.

She said that once a mom abandoned her baby, an initial informal interview was conducted to get the baby’s history and to provide counselling to the mother and her immediate family should they require it.

“We explain the pros and cons of each too so that the mother can decide what is the best suited option for them and the baby and possibly other children that might be part of the family. It is important that they understand the difference between the options available to them,” said Hassim.

New BeginningZ also offers a baby wall service where mothers can place their baby in a special caving in the wall.

“The baby wall is used only as the absolute last resort. Once the baby has been placed, an alarm rings inside the house, a caregiver comes out to fetch the baby and after a quick medical assessment the person will call me. I will fetch the baby immediately to bring them to the New BeginningZ baby haven,” said Hassim.

She explained the importance of the mother speaking to a loved one or a social worker about their options.

“We want to encourage mothers not to leave their babies in dustbins or public toilets or put them in plastic bags. Rather come talk to us, call us; it doesn’t matter how bad they think the situation is or how bad they feel about it. We can and will help,” said Hassim.

She added that New BeginningZ worked with the departments of health and social development as well as other NGOs.

“We receive babies almost on a weekly basis from all over Pretoria, Johannesburg and neighbouring provinces like Limpopo and North West. We work with mothers in crisis pregnancies from everywhere,” said Hassim.