Jeff Radebe believes the 'collapse' of the conference is wishful thinking by the media. 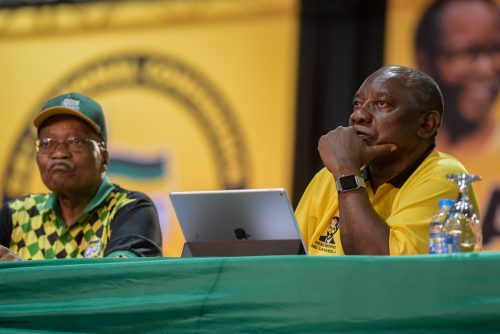 ANC presidential candidate Cyril Ramaphosa sits beside the outgoing President Jacob Zuma at the ANC's 54th National Elective Conference at Nasrec, Johannesburg, on 17 December 2017. The ANC gathers to elect new leadership, including a new party president for which Cyril Ramaphosa and Nkosazana Dlamini-Zuma are the candidates. Picture: Yeshiel Panchia

The Nasrec 68, now believed to be votes of delegates from Vhembe district in Limpopo and Abaqulusi district district in Kwazulu-Natal, continues to dominate the news at Nasrec.

While it has been reported that voting for the NEC has concluded, it has now emerged that the steering committee in charge of the national conference will shortly go in to a meeting with Elexion officials.

The steering committee is constituted of provincial secretaries and the deputy secretary-general Jessie Duarte and chaired by newly elected chairperson Gwede Mantashe.

The Elexions electoral agency is a company contracted by the ANC electoral commission chaired by former parliament secretary Sindiso Mfenyana with stalwarts who have no interest in leadership positions in the party.

The bone of contention is whether those votes should remain quarantined to avoid what Mantashe referred to as “contamination” of the conference process and thereby avoid a gruelling court case.

Rumours abound in the corridors at Nasrec, however, contradict the view that the affected parties will not resort to the court. ANC chairperson Stan Mathabatha and Supra Mahumapelo told the media the court case would be thwarted.

“Not true, Adv Dali Mpofu remains on a retainer as both districts are most certainly going to court. They are determined to have their votes counted for the top six and the national executive committee,” a source said.

Political analyst Mcebisi Ndletyana emphasised that it would be amiss for the the 68 delegates to not challenge the decision of the “missing votes”, as new secretary-general Ace Magashule has a long history of allegations.

He was accused of rigging Free State provincial elections where he has been chairperson for 10 years.

Dr Siphelele Dube, describing himself as a ‘friend of the delegates’, said he was from Abaqulusi, and would most certainly ensure their lawyers brief senior counsel to bring an urgent court order against the decision to exclude their ballots.

He said their decision was primarily based on being ostracised during branch general meetings after openly declaring they would be voting for Cyril Ramaphosa in the lead-up to the conference. He, like the Limpopo delegates at the conference, is adamant that all those votes were cast in favour of Senzo Mchunu for the secretary-general post.

Meanwhile, confusion reigns at Nasrec, with ANC communicators maintaining a tight lid on the flow of information between the media and steering committee.

Journalists continue to be separated from delegates by a fence, even in cases where office-bearers are showing an intention to speak.

Minister in the Presidency Jeff Radebe this morning told a business gathering that the inclusion of “collapse” during the conference was the media imposing its own wishes, a situation the party would ensure did not occur.