Despite setbacks, Andy Birkett and Hank McGregor manage to stay in contention after the second stage. 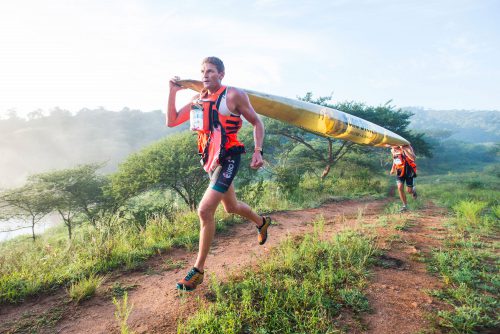 They were put under pressure throughout the day, but the Euro Steel pair of Hank McGregor and Andy Birkett managed to fight off the pack to take a slender lead into the final day. Photo: Anthony Grote/ Gameplan Media.

Recovering from a technical problem, Andy Birkett and Hank McGregor chased down the leaders on Friday to remain in charge heading into the third and final stage of the FNB Dusi Canoe Marathon in KwaZulu-Natal.

Birkett and McGregor, who led by nearly two minutes over Siboniso Khwela and Siseko Ntondini at the start of stage two, were caught at the Confluence rapids after experiencing rudder problems.

Despite slipping back, however, they managed to close the gap, keeping themselves in the hunt in an exciting four-boat battle.

“That’s how it goes – it’s Dusi racing – so we’re just happy to still be in contention,” Birkett said.

Former winner Ant Stott and Banetse Nkhoesa were fastest on the day, completing the second leg in 3:01:26.

Birkett and McGregor retained their lead, however, one second ahead of Adrian Boros and Carl Folscher in the K2 contest.

Stott and Nkhoesa were well placed in third overall, followed by Khwela and Ntondini, with the top four boats separated by just three seconds, setting up a cracking battle over the final stretch to Blue Lagoon.

In the women’s race, sisters Jordan and Cana Peek covered the second stage in 3:35:55, and though chasers Bridgitte Hartley and Christie Mackenzie chipped into their advantage with a late surge, the siblings remained nearly five minutes clear.