The flamingos started returning to the dam last week after leaving about two weeks ago due to extreme heat, and are breeding again. 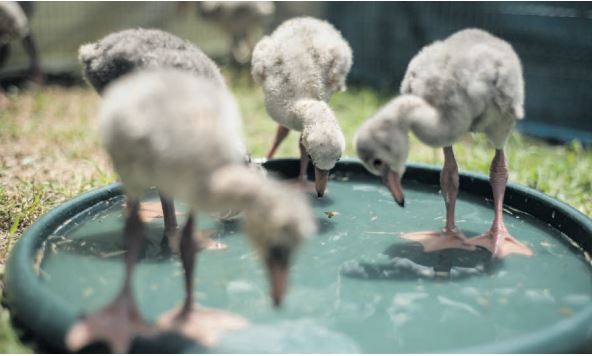 Lesser flamingo chicks at the Pretoria National Zoo, 6 February 2019, where 150 of the chicks rescued from the drought-stricken Kamfers Dam in Kimberley are being hand-reared. Picture: Jacques Nelles

As adult lesser flamingos continue to return to Kamfers Dam in Kimberley in the Northern Cape, BirdLife South Africa is appealing to people in the area not to disturb the birds as it is their breeding season.

The flamingos started returning to the dam last week after leaving about two weeks ago due to extreme heat. This caused them to go elsewhere for food and water and abandon more than 3 000 flamingo chicks.

“We have seen that when there’s human disturbance at the site, the flamingos move away and when the disturbance moves off, they return to the nests.

“So the species is very sensitive to disturbance.

“I want people to be very cautious about getting too close to the birds as any human interference could result in them abandoning the breeding attempt,” CEO of BirdLife Mark Anderson said.

BirdLife SA has people at the dam monitoring the birds.

Anderson said adult birds were sitting on the nests and the young chicks were showing signs of activity and appeared to be doing well.

There are only a few chicks left at the dam after more than 3 000 chicks were transported to places of safety and rehabilitation centres across the country after their parents flew away in search of water and food in other areas.

The Society for Prevention of Cruelty to Animals, other nonprofit organisations and the provincial department of environmental affairs have rescued thousands of flamingo chicks at the dam.

The chicks are reportedly doing well at the places of safety and rehabilitation centres and would be returned to the dam once they have recovered and are old enough.

According to Anderson, the dam is one of only four breeding sites on the continent for the lesser flamingo species.