A SANParks report has reignited the debate on the elephant count, but one thing is clear - the Knysna elephant is under serious threat. 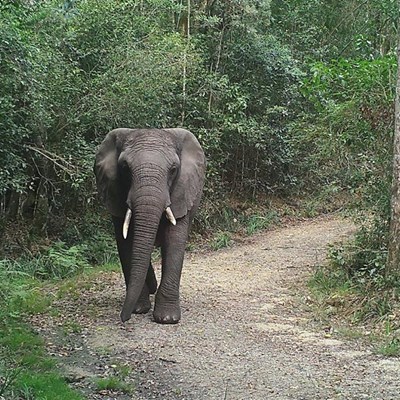 Many believe that this elephant is the last of the Knysna elephants. Image: SANParks scientist, Lizette Moolman

SANParks last week released results of research conducted in the Knysna forest, which captured what may be the last free-ranging elephant roaming the area and moving along at least five different properties. The results of the project came with a powerful debunking of any theories advancing the view that there is more than one tusker left in the area, reports Knysna-Plett Herald.

But conservationist Gareth Patterson strongly disagrees, stating this simply cannot be true, as DNA testing has shown that the elephant is part of an evasive herd consisting of at least five other elephants.

A scientist at SANParks, Lizette Moolman, stated that several “elephant routes” were monitored for more than a year using camera-trap technology and that only one elephant was captured, repeatedly so.

The 80 cameras, evenly arranged with spaces between them no larger than the smallest range recorded for elephants, were active for 15 months, during which the same female elephant was identified in 140 capture events – always on her own. No other elephants were photographically captured, Moolman said.

“She displays unusual behaviour for a cow: she interacts with large objects which she presumes could be other elephants and video footage has suggested that she is fearful of humans,” said Moolman, adding that the elephant walked in circles and changed direction when trailed.

The lone elephant is an adult female, and indications are thst she has not calved for a long time, if ever.

“She displayed swollen temporal glands which suggest she may be stressed, potentially due to her solitary existence,” said Moolman. 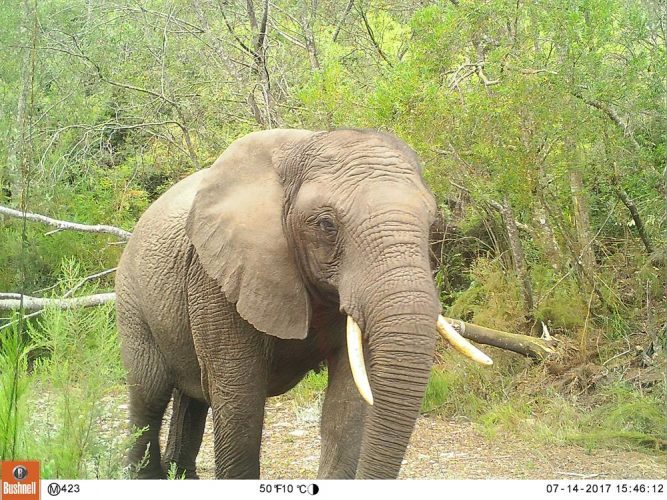 Could this be the last elephant roaming freely in the Knysna forest? Photos: SANParks.

The study found that the elephant is roaming through the forest and a section of fynbos within the Garden Route National Park (GRNP) and across adjacent private properties not owned by SANParks.

The national parks body has already consulted with these landowners as well as other stakeholders to determine how to manage the situation, Moolman said.

“The next step is to hold talks with national authorities and international experts as to what is the way forward,” said GRNP manager Paddy Gordon, adding that options that would be explored include the possible relocation of the elephant to another area or even leaving it alone in the forest.

Watch a video below:

According to Patterson, however, the study’s finding is inaccurate: “I knew about the outcome of this study over a year ago and it did not worry me then or now, because it is simply (thankfully) wrong in my opinion.

“Scientists are moving away from this form of census as it can be inaccurate,” he stated, referring to the use of camera traps.

“I undertook two DNA censuses. The results of the first in 2007 indicated the presence of five (relatively young adult) females.

“Results of the second (2009) came up with the same five females, plus a sixth that we missed the first time around. Fieldwork additionally indicated the presence of three bulls and of calves,” said Patterson.

“Hundreds of such measurements over the years have indicated we have [differently] aged elephants here – from young calves to large bulls. You do not have to be an elephant expert to see there are different sizes of footprints here,” Patterson said.

“I worry daily about the Knysna elephants, as it is a tiny endangered population. But if I believed that only one of these elephants exists, I would be the very first person to say, ‘How could we have allowed this to happen?’ And I am not saying this. What I would strongly recommend scientists do, though, is to undertake a comparison DNA census to determine the current numbers of the Knysna elephants.”

In response, SANParks maintains the result of its survey is accurate. “Gareth Patterson and Lorri Eggert’s study was published in 2007, reporting on their field study that was conducted more than 15 years ago. “That was their finding of what the situation was then. Although we can speculate about why this was not the most reliable technique to use, it is only speculation and we can only really report on and explain what it is that we found 15 years later.

“SANParks carried out this survey to gather reliable and consistent information on the Knysna elephant behaviour and numbers, to enable well-informed decision making, and not to try and prove previous investigators wrong.”

The statement continued: “Whether there are one or two or three elephants, we can safely say there is a problem, which is that the Knysna elephant is under threat. If various parties, on different sides of the number debate, can agree to disagree about the number and reach common ground – that there is a problem – then the conversation can progress to a next, more constructive level.”