Hopkins received heavy criticism from social media users and was reported to Twitter. 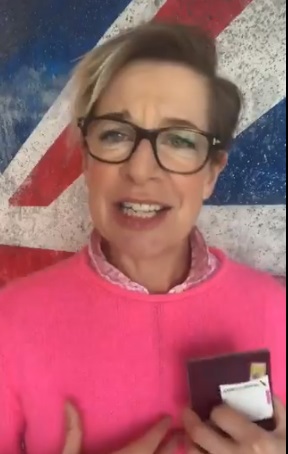 Hopkins tweeted a pic of Semenya holding up two fingers, with the caption: “Olympic champion Caster Semenya arrives at tribunal in Switzerland for a landmark case that will challenge how many testicles you can have to compete as a WOMAN in Olympic sport.”

The 28-year-old Olympian and Athletics South Africa (ASA) are attending a hearing in Lausanne, Switzerland to challenge the International Association of Athletics Federations (IAAF) new rules, which seek to restrict female athletes with hyperandrogenism from competing against other women at the international level in certain events. The hearing, held behind closed doors, is expected to conclude on Friday.

Meanwhile, legal teams continued to trade blows on Tuesday on the sidelines of the hearing.

Lawyers representing Semenya unveiled a total of 19 experts to assist them in pleading their case, a response to an unpopular move by the IAAF, who released a list of experts of their own on Monday.

ASA lashed out at the federation, accusing the body of employing underhanded tactics and allegedly violating a confidentiality agreement.

Among the ten experts who would be introduced by Semenya’s lawyers at this week’s Court of Arbitration for Sport (CAS) hearing are Veronica Gomez-Lobo, a professor of obstetrics and gynaecology; Lih-Mei Liao, a clinical and health psychologist; Dankmar Bohning, a professor of medical statistics; Payoshni Mitra, an advocate with a decade of experience working with athletes with hyperandrogenism; and Richard Holt, a professor of diabetes and endocrinology.

This was due to the fact that Semenya was represented in her personal capacity by her own team of experts. ASA has taken up the challenge on behalf of all affected female athletes worldwide, both current and in future. They believe that the regulations predominantly target African athletes.

I don’t give a flying fuck if you “agree with Katie Hopkins this one time” she’s a racist, classist, homophobic piece of shit who deserves zero air time and retweeting her does nothing but give her a platform to spew further hate

We be waiting at the airport on your grace's arrival…. ???????? pic.twitter.com/cSuTXApEU8

Pls. Stay in your lane pic.twitter.com/9pmOh0ktox

We have not forgotten… pic.twitter.com/234iC1NDrj

or more news your way, download The Citizen’s app for iOS and Android.