The institute recently partnered with AfriForum and will formulate policy for their new agriculture initiative. 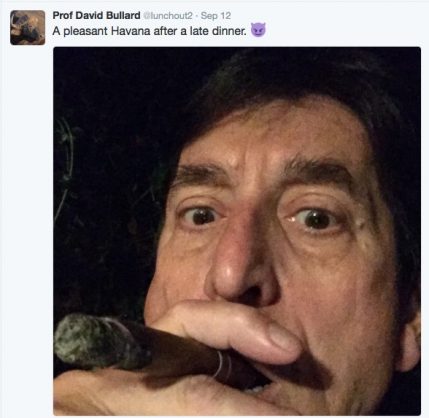 The South African Institute of Race Relations (IRR) has been met with a backlash on social media following their decision to host controversial columnist David Bullard at a talk in Stellenbosch about what “the future really holds for South Africa”.

Bullard was fired by the Sunday Times for a column that caused outrage and was considered racist by many. The column, titled “Uncolonised Africa wouldn’t know what it was missing”, imagines South Africa if white settlers hadn’t arrived.

He has remained outspoken since his sacking and was embroiled in a Twitter war with journalist Michelle Solomon on the topic of rape in 2014 with his views causing an outcry. He next made the news in 2016 for sarcastically tweeting that the “darkies” should destroy the university to save “us” on taxes amid the #FeesMustFall protests.

The organisation’s decision to host Bullard has been slammed on Twitter.

“The column that got him fired by the Sunday Times reveals such a deep hatred. Every line,” one user said.

“Can’t see how you will be able to live this one down,” said another.

“Is this what the IRR has been reduced to? A faux libertarian organisation representing the views of racist whites who barely understand the social construct of SA?” asked another.

The IRR bills itself as a classical liberal advocacy organisation. It was established in 1929, and was known for its opposition to apartheid, with Michael Morris, the institute’s head of media, calling it “the world’s leading anti-apartheid think tank for the duration of National Party rule”.

The comments on Twitter, however, reflect that some consider it a right-wing organisation today. It has drawn criticism on social media before the announcement of the Bullard talk for its decision to partner with AfriForum, who will formulate policy for their new Southern African Agriculture Initiative (SAAI), which will reportedly seek to offer those in the agricultural sector an alternative to AgriSA, currently the largest organisation representing farmers and agricultural workers. AfriForum and the IRR have worked together in the past, with News24 reporting that AfriForum has provided the institute with funding.

The Citizen spoke to the IRR about their decision to invite Bullard to speak. “We believe a forthright conversation about South Africa, its people and their future has a critical role to play in confronting the dangers that face the country today, and that David Bullard – among other outspoken commentators – can make an important contribution,” Morris said.

As for the column that was slammed for racism back in 2008, Morris says it was “satire” and that people must “step beyond political correctness” and hear his views.

“David Bullard was fired for writing satire which was considered politically incorrect,” he said.

“While we would not automatically subscribe to every point of view of every columnist or satirist, we value the contribution of candid South Africans to an honest exchange of views about the country and its problems at a moment of mounting crises.

“We believe David Bullard has a contribution to make, not least in encouraging people to step beyond the imposed boundaries of political correctness in order to grapple with the tough realities which ultimately impinge with greatest harm on South Africa’s black majority.

“There’s another important consideration; all freedoms rest on free speech, and we think it’s particularly important to fight for this freedom on South African university campuses. Mr Bullard might be unpopular in some quarters but this is not a good reason to deny him an opportunity to speak. Anyone who disagrees with him is free to engage him in debate and prove the error of his opinions.”

The Institute of Race Relations is transparently a white nationalist group. Still, hosting David Bullard like this is astounding.

The column that got him fired by the Sunday Times reveals such a deep hatred. Every line.

Should you choose to remember, I repost it below: (1/16) https://t.co/2qFojjtHBv

You say you're not racist. But then you team up with DAVID BULLARD? And you don't get how that reflects on you? Can't see how you will be able to live this one down.

I must confess, when thinking about the state of the nation, never ever have I asked myself, "I wonder what David Bullard thinks about this?"???? https://t.co/IsH7jkZSFr

Why is David Bullard, a self-confessed Racist, your guest?

Are Dan Roodt, Steve Hofmeyer and Ernst Roets next for you? @stash_jack

David Bullard to talk on what we should do? That racist!!!??
They have lost the plot.