If adopted, anti-poaching units would be outgunned by poachers brandishing high-calibre assault rifles such as AK47s. 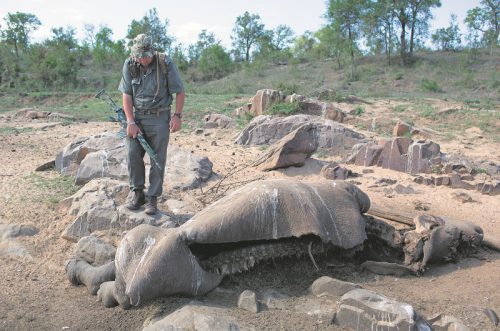 Rangers may soon have to face poachers, who have serious firepower, armed only with hunting rifles or handguns, if proposed amendments to Private Security Industry Regulations go ahead.

Minister of Police Bheki Cele has gazetted amendments for public input including that only cash-intransit guards can carry semi-automatic weapons.

If adopted, anti-poaching units would be outgunned by poachers brandishing high-calibre assault rifles such as AK47s.

The proposed amendments state that possession of a semi-automatic weapon would be allowed “only for security services aimed at protecting valuables which are being transported” or assets-in-transit.

Exceptions would only be permitted if recommended by the relevant authority and approved by the Central Firearms Registrar.

Armed response unit guards would also be limited to handguns or shotguns. These could also be used by private investigators, environmental protection or anti-poaching services, close protection services and guards at national key points.

Possession and use of any firearm on public or private school premises by security service providers would be outlawed.

The only exception to this would be in cases where contracts stated that the guards required the use of firearms.

Security guard uniforms would have to bear at least two badges or insignia with the name of the employer and the name and registration number of the security officer.

These would have to be displayed on the front top part of the uniform. The words “Private Security” must be clearly visible and the uniform may not be made from fabric or other materials in any shade of blue or which has a camouflage design or pattern.

The Capitalist Party of SA slammed these amendments, saying they would effectively disempower the entire private security industry.

“Armed response and reaction unit officers will be prohibited from carrying semi-automatic pistols (which is by far the most common armament in this line of work) during the execution of their duties.

“Tactical intervention, anti-hijacking, close-protection and anti-poaching units will similarly be deprived of use of semi-automatic handguns, rifles, and carbines.”

The party’s Gideon Joubert said the proposed legislation perversely inferred that it was appropriate for cash and other assets to be protected by security guards armed with semi-automatic weapons while in transit, but that the lives of innocent citizens could not be protected in the same manner.

“By proposing these amendments, Minister Cele has elevated the value of insured cash and assets above human life,” he charged.