San, Khoe remains obtained unethically by UCT in the ’20s to finally rest in peace

Analysing their teeth and bones, it was found that the nine individuals came from Sutherland and surrounding arid areas, not the Eastern Cape. 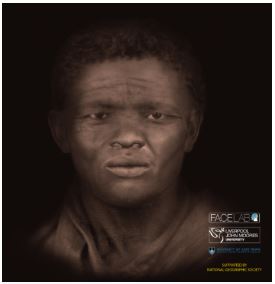 Facial reconstruction of Klaas Stuurman, whose body was disinterred in the 1920s on a farm near Sutherland. Picture: Supplied by UCT

An interdisciplinary team has shed light on the lives of nine individuals whose remains were obtained unethically by the University of Cape Town (UCT).

The findings, released during a media briefing on Monday, showed a glimpse into how the San and Khoe people were tenacious in difficult circumstances in the 19th century.

UCT found the individuals were from a single farm in Sutherland, the Northern Cape, where they were removed from their final resting place and donated to the university in the 1920s.

It set about locating the living descendants and its investigation indicated they were likely to have been related to members of the Stuurman and Abraham families in the Sutherland area.

These families then asked the university to compile as much information as possible about the five men, two women and two children.

The team, led by UCT’s Dr Victoria Gibbon from the human biology department, looked at the history and archaeology of the original cemetery, biological reports, stable isotope and DNA analyses, and facial reconstruction for all but one who did not have a skull.

Researchers found that eight of the individuals lived and worked on the farm, with seven being buried in the labourer cemetery and one in the mountains.

The grave of an “unknown individual” was accidentally exposed by a road crew and the skeleton, dating to the precolonial era, was also removed and sent to UCT.

Cornelius Abraham and Klaas Stuurman were two of the people who had both names and surnames.

Gibbon found that the adults had a relatively short stature; showed signs of osteoarthritis resulting from heavy physical labour and/or extremely active lives and most appeared to have had poor dental health.

Stuurman and the pre-colonial individual showed signs of an untimely death with cranial trauma, while some showed signs of healed trauma in the form of a broken nose, hand and cheek bones.

Analysing their teeth and bones, it was found that they came from Sutherland and surrounding arid areas, not the Eastern Cape, where there is more summer rain and higher rainfall overall.

Despite the challenges they faced on the farm, they still maintained some of their cultural identity in the form of grave style and evidence of squatting, a culturally important sitting position of the San people.

The facial reconstructions were done by Face Lab at Liverpool’s John Moores University in the UK and the ancient DNA analyses by the Max Planck Institute for the Science of Human History in Germany.

“Providing this sense of identity is an important part of building national pride, justice, and true democracy,” she added.

Family member Anthony Mietas said they had gone from shock to excitement as the journey unfolded, their emphasis always on restoring justice and redress.

The university met with the Stuurman family from the Eastern Cape last month, after meeting family members in the Northern and Western Cape.

Edmund Stuurman from Port Elizabeth told News24 he believed the ancestral remains should be buried in the Gamtoos River Valley and not Sutherland.

He said the Stuurmans would have a conference and then take a resolution on the way forward.

The university is in the process of finalising the reburial.