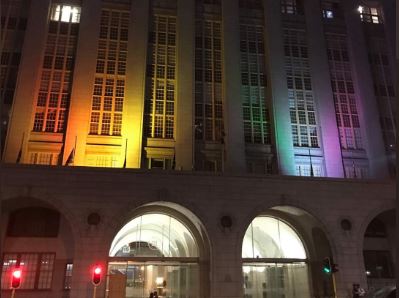 The Western Cape Legislature building is lit up in the colours of the rainbow flag in support of Cape Town Pride, 26 February 2020. Picture: Twitter / @shibnimrajie

The Western Cape legislature building will be lit up in rainbow colours to mark Cape Town’s Pride, the annual celebration of the LGBTQI+ community and a focus on issues it faces.

The building was lit up on Wednesday night, and will be lit every night until Sunday morning, after the grand Pride Parade.

The parade is a highlight on the city’s LGBTQI+ calender, with extravagant costumes and elaborate floats making their way through the city to the Cape Town Stadium.

The legislature’s speaker, Masizole Mnqasela, said: “By illuminating the legislature building in the pride colours, we not only demonstrate our pride in our Constitution, but also our pride as a true rainbow nation.

“We also acknowledge that the LGBTQI+ community still faces many challenges and prejudices on a daily basis and, with this visible symbol, we show our support to fighting for a truly inclusive South African society.”

“We know that many people still face discrimination and violence as a result of their sexual or gender identity and this is our way of shining a light into those dark spaces and saying we are proud to stand up for diversity, equality and human rights.”