The men from Ellis Park's shocking defending and poor game-management suggests this is a team on the brink of collapse. 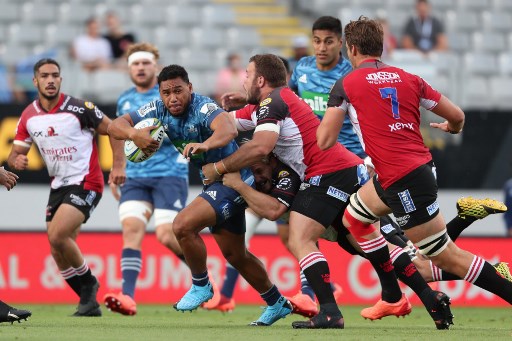 Blues' TJ Faiane (3rd L) is tackled during the Super Rugby match between the New Zealand Blues and South Africa's Lions at Eden Park in Auckland on March 14, 2020. (Photo by MICHAEL BRADLEY / AFP)

The shortcomings of the out-of-sorts Lions were painfully exposed again on Saturday after they were mauled 43-10 by the Blues in Auckland.

While it was a fourth straight win for the Blues, who now move top of the overall log, the Lions were once again hamstrung by poor game management and alarmingly weak defence.

The Lions showed decent initiative on attack for most of the first half, but the Blues ability to shred their defensive line from broken play proved decisive as they eventually scored seven tries.

It was the Lions’ fourth straight defeat and their fifth in six outings.

Despite the scoreboard, Lions lock Willem Alberts proved his worth in a losing cause, being instrumental for the visitors in the first half with his ability to get the team over the advantage line. If the Lions can sort out the rest of their problems, the 35-year-old veteran could prove a catalyst for some sort of revival.