Superbalist takes down art section after questions about ‘racist’ lithographs

This comes just days after Superbalist issued a statement apologising for the company's stance on the Black Lives Matter movement. A screenshot of part of a lithograph sold by Superbalist | Image: Twitter

Online retailer Superbalist has reportedly taken down the art section under the decor portion of their site after the company was hit with questions about two racist lithographs that were sold on their site and when the products would be taken down.

The two lithographs, titled ‘B is for Black’ and ‘W is for White’ were of a black man and a white man and were – according to screenshots – sold out. They were priced at around R5,300.

Designed by Anton Kannemeyer, the ‘B is for Black’ lithograph featured an early 1900s-style caricature of a black person synonymous with racism along with a derogatory definition that was allegedly sourced from Chambers & Oxford dictionaries.

“Black. Adj. Opposite of white. Dirty. Messy.” reads part of the definition.

A screenshot of the ‘B is for Black’ lithograph that was once sold on Superbalist | Image: Twitter

On the other hand, the ‘W is for White’ lithograph featured a drawing of a smiling, middle-aged white man along with the definition “White. Adj. Colour of milk or fresh snow. Innocent. Unstained. Pure.”

Twitter user Rhoda Davids tweeted screenshots of the images along with a query to Superbalist about when these would be taken down. Although Superbalist has yet to respond, the images were no longer available on their site. However, a simple Google search of the term ‘B is for Black lithograph’ shows that the image was once available for sale on the e-commerce site.

So @superbalist when do you remove this from your site? #superbalist pic.twitter.com/cAu5mgivHg

According to a description on the Aspire Art website, where the items were on auction for between R30,000 and R50,000, these two prints are from a collection called the Alphabet of Democracy series.

Kannemeyer is a 52-year-old South African comics artist, who sometimes goes by the pseudonym Joe Dog. He has lectured the University of Pretoria, Technikon Witwatersrand, and was also a senior lecturer at the University of Stellenbosch.

A feature on the artist on the Artprintsa site labels Kannemeyer as controversial.

“The zeal of preaching a new doctrine, complete with its own style, codes and insider jokes comes through in all of his work. Kannemeyer’s religion is the comic. Kannemeyer’s language is satire.”

The feature further explains that images from his Alphabet of Democracy series have appeared regularly over the years.

“The first were done in 2005, ‘J is for Jack Russell’ and ‘D is for dancing ministers’. The initial reference is to childhood primers and illustrated alphabets, Letterland gets political.”

According to Artprintsa, some of the definitions used in the series are from dictionaries, albeit littered with prejudice, used in schools.

“N is for nightmare and B is for black and W is for white resonate as much in the USA and Europe as they do here on the southern tip of Africa.”

“In many of his prints, Kannemeyer investigates the continued existence of racism in Africa and it’s double standards. Prominent in his work is his continued interest in exposing the hypocrisy of the white liberal in South Africa. With his confrontational images and humour, he brings to attention prejudices and worldviews that can then be dealt with and hopefully be done away with.”

Jesus these have been on the site for years, can't believe it's still there. I can't remember the artist's name, I know it's meant to be "satirical", but I've always been uncomfortable with these.

Side note: I see they've suddenly taken down their whole Art category ????

Good. But my mind is blown that it’s there in the first place!?

This comes just days after Superbalist issued a statement apologising for the company’s stance on the Black Lives Matter movement.

The company apologised for initially telling staff that they had “no particular” stance on the matter as they “do not as a company comment on issues outside of [their] business.” 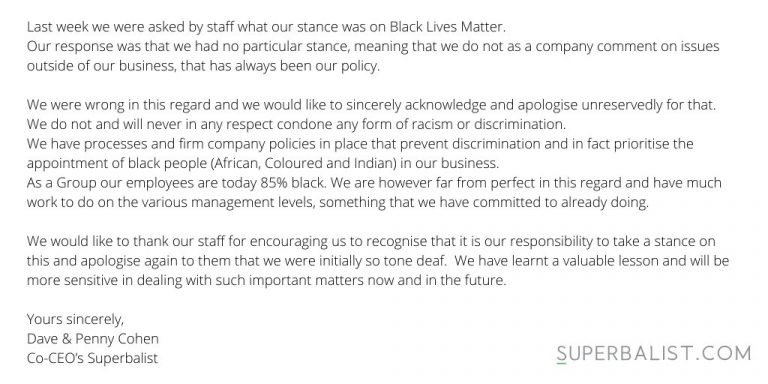