Oscar should not have asked for firearm – judge

Oscar Pistorius should not have asked a friend to hand him a firearm in a busy family restaurant, let alone handle the weapon, Judge Thokozile Masipa has ruled on Friday. 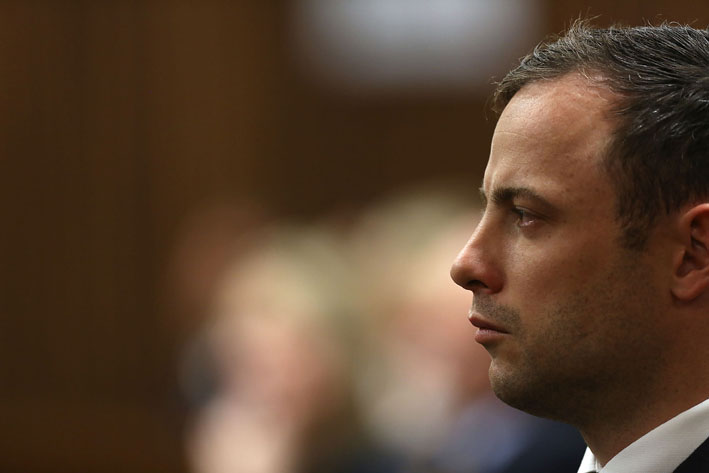 She found Pistorius guilty on a charge of contravening the Firearms Control Act by unlawfully discharging a firearm in a public place in January 2013, but acquitted him on a further charge of firing a shot with his pistol through the open sunroof of a car.

A shot was discharged while Pistorius was handling the firearm of his friend Darren Fresco in a busy family restaurant, Tasha’s, in Melrose Arch early last year.

The shot narrowly missed his friend, boxer Kevin Lerena, and hit the floor. Lerena was injured by the shrapnel.

Pistorius did not dispute that he had asked Fresco to pass him the firearm under the table because he wanted to buy a similar weapon.

Lerena and Fresco both testified that Fresco had warned Pistorius there was “one up” (a bullet in the chamber) when he passed the firearm, but Pistorius denied hearing it.

Both witnesses said Pistorius had been concerned that someone might have been injured, apologised and asked Fresco to take the blame because he wanted to avoid publicity about the incident.

Pistorius insisted he never knew the firearm was loaded and blamed Fresco for the incident. He said a shot had gone off when he wanted to make the weapon safe.

Masipa said in her view it did not matter what had caused the firearm to discharge.

“No one suggested in intention on his part. He had asked for a firearm in restaurant full of patrons.

“He may not have intentionally pulled the trigger. “That in itself does not absolve him on the charge of negligently handling the firearm where it created a risk to the safety of people and property and not to take reasonable measures to prevent it,” she said.

The Judge acquitted Pistorius on the charge of firing a shot through the open sunroof of a car while in the company of Fresco and his former girlfriend Samantha Taylor because the two had contradicted each other in material respects while Pistorius totally denied the incident.

She said he could not be found guilty of the unlawful possession of .38 ammunition either. Pistorius claimed the ammunition belonged to his father Henke, although his father never confirmed this.

Masipa concluded that the state had not proved that Pistorius had the necessary mental intention to possess the ammunition in the legal sense and he could therefore not be convicted on the charge.