Tales from a hospital bed: Tokoloshe roommates, dealing with death and a little hope

This weekend will mark exactly a months since sports writer Wesley Botton was admitted to hospital, and though there's hope, there's also plenty of sadness. 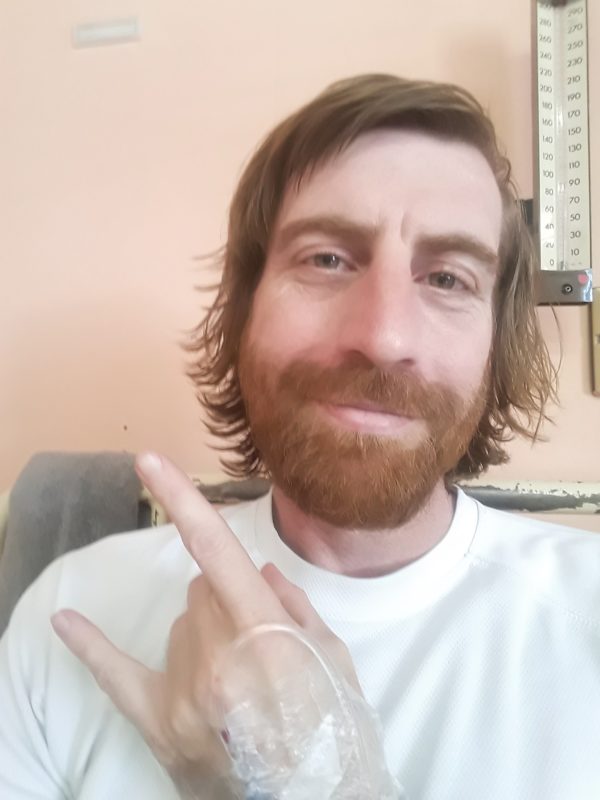 The Citizen's sports writer Wesley Botton has been stuck in hospital for exactly a month. Picture: Wesley Botton

Being in pain here is par for the course, especially in our ward which is reserved for people with broken bones.

So they don’t shy from doses prescribed by the doctors. Today someone in the room next door yelled for a nurse and told her he was feeling sore. “And then?” she asked.

It was a good question. She didn’t get an answer.

Debra brought the kids for a visit but they wouldn’t let the girls into the hospital. We launched a furious attack on the security guards but we lost a valiant fight. The kids were turned away at the door, so we had a video chat when they got home.

I offer my prayers to the gods of technology.

Nathi had to have a Covid swab before his operation and he didn’t like it. “You pushed that thing into my brain!” he told the doctor.

Brighton has had an op on his broken leg. The surgeon said it was a successful procedure.

And Frans is on the list for his last op tomorrow! He’s been here for nearly five months and he just wants to get back to Limpopo, but he’s in the home stretch now 🙂

I saw the doctors this morning and my toe is finally healing properly. The bones are in place and the tissue is still regenerating.

It’s not a good idea to get your hopes up here and I still don’t know how long I’ll have to stick around, but I’m glad there’s a growing light at the end of the tunnel.

The security guards won’t let patients out of the hospital.

Apparently some people “abscond”. They just leave and don’t come back. I guess it causes complications.

But I got a note from one of the nurses which cleared my path to the canteen, situated elsewhere on the property, and I felt the sun for the first time in nearly a month.

I’ll try get more notes if I have to stick around.

Kevin, who is also in the orthopaedic ward, asked me for a light so he could have a smoke in the bathroom. The security guard walked in with Kevin holding a smoke and me holding a lighter.

I didn’t even bother to explain that I hadn’t planned on smoking inside. As far as the security guard was concerned, I was caught in the act.

On the bright side, I’m already considered guilty of the crime so I’m protected by double jeopardy. If I ever do feel the need, I might as well smoke in the bathroom.

Whenever someone dies, they wheel a stretcher with a green cover from the mortuary to the theatre or the deceased person’s ward.

When they push the stretcher back to the morgue, there is a person under the cover. Most of us drop our heads when the porters walk past. Sometimes we stop talking.

It is terribly depressing and it happens regularly.

But it’s also a reminder of how lucky we are to be alive. We’ve got to enjoy it while it lasts.

Nathi finally had surgery on his ankle and Brighton has been sent home to recover from the op on his leg.

Darian, the new guy, is the ninth roommate we’ve had in the last few weeks.

Frans joked that the other two beds are lucky because their occupants seem to be pushed through the door.

Based on statistical probability, I think the luck on our side of the room is about to change.

Three steps forward and two steps back. That’s how they roll around here.

Darian, the new guy in our room, needs surgery on his shoulder before he can start chemotherapy.

He was first on the emergency list today but they couldn’t operate because there was no running water. Again.

It’s the second time this has happened since I arrived and it has severe repercussions because surgeries are placed on hold. The cogs in the machine just grind to a halt.

Frans has been here for nearly five months and he needs one more op before he can go home to his family.

After being taken off the list for theatre, he has now been told the only doctor at the hospital who can perform the procedure has taken leave.

He wants to launch a protest if they don’t transfer him to Bara where they have more specialists. I’ve agreed to help him write a strongly worded letter.

There’s still not enough tissue in my toe, so I was told today I have to stick around a little longer 🙁

It is healing, slowly, but I might still need a skin graft and I must stay on antibiotics until the issue is sorted. The doctors will probably check again on Monday.

Maybe by then we’ll have taken a few steps forward. The people in our room have taken enough steps back.

We have running water today, so the doctors have been able to operate again and get back to saving lives.

It also means we got coffee this morning and were able to bath from our bowls. I haven’t had a proper bath in a month. Or a good cup of coffee.

Those are the first things I’m doing when I get home.

I’ve become so scruffy I figured I may as well go all the way with it. Decided not to shave my beard until I get out of here, as a symbolic display of my plight.

Looks like I’ve been stranded on a desert island for four weeks. I think this proves I could make it through an entire season of Survivor.

Nathi developed a love-hate relationship with his physiotherapist. She loved to hurt him and he hated it. But she got him back in motion in no time and they took a selfie before he hopped out of the door on crutches.

Darian is back on the list for surgery. They should sort him out today.

Frans said he feels like the world doesn’t notice him. Everything just floats by as if he’s “an invisible tokoloshe”.
I told him he is a tokoloshe. That’s why our beds are raised.

We shared a good laugh.

I needed another drip. The sixth one I’ve had since I got here.

The nurse couldn’t find a vein so she called a doctor and between them they poked me with seven needles. No luck.

They called one of the older nurses to figure it out.

“First time,” I said with relief after she found a vein.

She smiled. “First time, every time.”

Tales from a hospital bed: Finally going home after six long weeks
4 months ago
4 months ago

Tales from a hospital bed: Finally going home after six long weeks
4 months ago
4 months ago