Her remains are being kept at Haining Funeral Parlour in Zhejiang province, China. 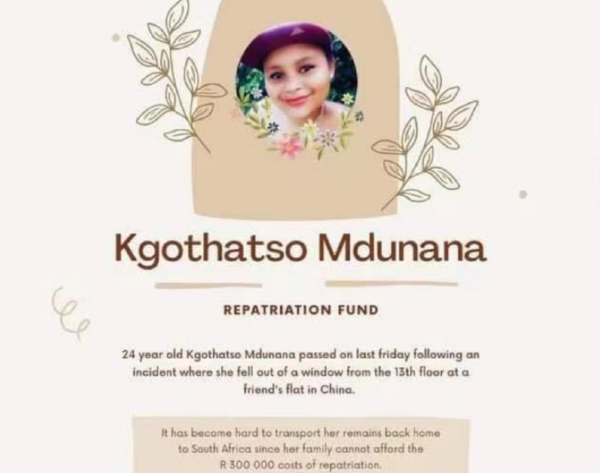 Police in China have found the cause of Kgothatso Mdunana’s death last month to be an accidental fall from a building, the Chinese Embassy in South Africa said.

Mdunana, 24, from Lombardy West in Johannesburg, was last seen alive by her roommate, known as Princess, in Qingdao, China, on 30 April.

She was a final-year civil engineering student at Shandong University of Technology. It is reported Kgothatso was visiting her friend when she fell from a 13th floor apartment in Hangzhou.

Chinese police launched an investigation into her death and ruled out the possibility of homicide. The conclusion of the investigation has been communicated to the family through her friend.

Her remains are being kept at Haining Funeral Parlour in Zhejiang province, China.

The embassy said it had told the family it was ready to issue visas and provide other facilitations for the deceased’s parents to travel to China to repatriate her body.

“The embassy deeply regretted the tragic loss of Ms. Mdunana and expressed sincere sympathy to her family. Since the news broke, the embassy has availed itself to provide assistance to the bereaved family in dealing with the aftermath of the unbearable loss, including facilitation of the recent legal documents for the repatriation of Ms Mdunana’s remains,” it said in a statement.

“A briefing to the families by the local police is scheduled to happen in the future.”

Following her death and estimated repatriation bill of R350,000, the family pleaded for help from South Africans as her travel insurance had expired at the time of her death.

In just a few days, South Africans raised more than what the family needed, with one anonymous donor contributing R35,000 and another R370,125.

“As a family we are so relieved. We are so thankful to everyone across the globe. Yesterday I couldn’t believe it and I couldn’t sleep. We are just touched by what everyone has done. To move from R1,000 on Friday and now we’re standing on over R540,000,” he said.