Tshegofatso Pule memorial: ‘It is time for all men to stand up’

A candle light memorial was held in memory of Tshegofatso Pule, who was eight months pregnant when she was killed on 4 June 2020. 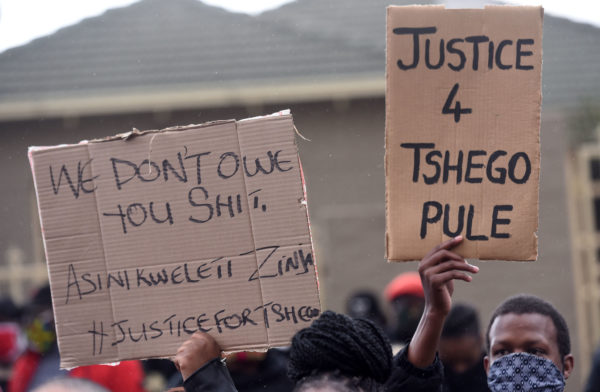 #Justice For TshegoPule awareness campaign members outside Roodepoort police station in Johannesburg, June 2020, after the body of Tshegofatso Pule was found hanging from a tree in an open veld in Durban Deep, Roodepoort. Picture: Ngel Sibanda

Legendary actor Patrick Shai delivered an emotional tribute to Tshegofatso Pule at a commemoration to remember the beautician from Meadowlands, Soweto.

“Why are men in South Africa silent about gender-based violence (GBV)?”

Shai called on men to play a part in fighting the scourge, which has plagued the country.

“Why are we silent when women and children’s rights are being violated by men? I am asking myself and those who are friends to the perpetrators, why are they silent? Why haven’t they come out and said, ‘it is our friend who did this’?

“They have put shame on South Africa. This is an indictment to us, as men. GBV continues to be a pain for women. Men are nowhere to be found and are not participating in men’s forums to end the scourge,” Shai said.

EFF deputy secretary-general, Poppy Mailola, called on all political parties to commit themselves and play a role in fighting against GBV.

Mailola spoke on behalf of her leader, Julius Malema. She said Malema had encouraged the Pule family to remain strong.

“They must never stop fighting. They are fighting for us, children, sisters and all voiceless women. You have inspired and motivated us. We are saddened by what had happened to Pule. We want to commit that we will do anything in our power and will speak about GBV everywhere,” said Mailola.

ANC chief whip in the City of Johannesburg, Solly Mogase, called on all men to play a role in the upbringing of their boys.

“It is time for all men to stand up. Prevention of GBV from happening, starts in the community. We must stop turning a blind eye to people who abuse women and children in our communities. We must stand against this scourge.

“What kind of a devil does such a thing to Pule. If men go to court to support (Ntuthuko) Shoba, it means we have a problem. They can’t go to court and defend the wrong,” Mogase said.

Shoba is expected to stand trial in the Gauteng High Court in October, for allegedly orchestrating Pule’s death.

Pule was eight months pregnant when she was killed by Mzikayise Malephane on 4 June 2020.

Malephane, who confessed to killing Pule, claimed Shoba hired him to kill Pule. It is alleged Pule was killed because she refused to terminate her pregnancy.