Survivor SA: Collateral damage on the way to merge

Survivor SA Season 8 saw Zamba head back to Tribal Council for the second week in a row as castaways prep for a possible merge. 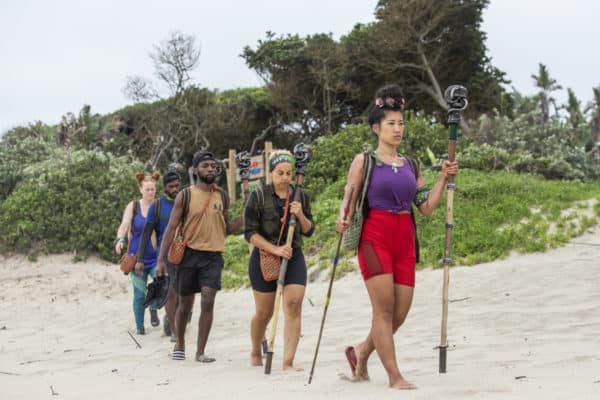 It is the stuff of folklore. Survivor SA, Immunity Island legend. Last night’s episode was an exercise in foregone conclusions, honesty and some good old gameplay.

Qiean became collateral damage in her Zamba teammates’ quest to make it to next week’s merge.

And The Citizen called it last week when predicting the next likely exit. It was between Qiean and Santoni, but the double agent prevailed in what was an emotional episode.

The Survivor quote of the week belongs to Qiean, as retold by Santoni: “I don’t want to eat in front of you, but I don’t want to mess crumbs on my bed.”

Eating in front of others without offering the spoils around previously foreshadowed Tyson’s name on the ballot a few weeks ago. Qiean should have taken a lesson from that playbook as it became clear, early in the show, that should Zamba head to Tribal Council again, she would be heading out.

As it played out, Zamba did return to the now familiar laager at Tribal Council. And in an emotional and somewhat aggressive pre-vote session, the fatigue, hunger and irritation were graffitied across the tribe’s expressions.

Wardah and Anele reaffirmed their dislike of one another and, while he held immunity, Smash did not play his trump card earned on his second visit to Immunity Island. But he is a marked man, and if merge were not scheduled for next week, it was likely a foregone conclusion that Wardah would engineer his torch to be snuffed next.

The Rewards Challenge and Immunity Challenge were rolled into one this week with a challenge that was not only highly physical but also tested mental mettle.

A water puzzle chase with a staircase and a ladder and a puzzle. It is hard to describe but this was one challenge that a couch potato nor a gym bunny could have likely done better at. It was that challenging.

Santoni broke down just before the start, citing her water rescue last week as an intense experience, filling her cup with fear. But she got by with a little help from her friends. It was a potential costly incident, with de facto chieftain Wardah bulls-eyeing her as a future liability.

Alliances across the tribal divide also became more evident when Chappies influenced his teammates at Vuna to send Anele to Immunity Island.

There, he enjoyed a Mexican feast for one and an emotional video-message from his family. At the same time, challenge victors Vuna had the same privilege with some touching and teary moments between the castaways as family messages made the reward taste even better.

Renier has moved closer to Chappies, playing a submissive role and creating a sense of allyship with last week’s show-hero.

The second quote of the week belongs to Renier. “I will be his (Chappies’) little minion for as long as needed. And then I will take my little minion sword and chop his head off.”

Seated well, Anele embarked on a treasure hunt and uncovered vote insurance. When he plays this card at Tribal Council, Anele can take any contestant’s vote and cast it. It is a powerful weapon which he wisely saved for a rainy-merge-day.

While Smash was island-styling, Qiean dropped cooked rice on the sand and, drive by fear and desperation not to be voted out, she literally picked up each grain of spilt grain, washed it, and placed it back in the pot. Later, Qiean approach Wardah in a bid to save herself and send Santoni packing.

With five members left after Qiean was excommunicated, Zamba’s weekly disintegration made next week’s merge inevitable.

Now, with safety in numbers, expect Anele, Chappies and Kiran to huddle with Santoni as Wardah would likely attempt to assume a position of strength early on.