Without the militant and revolutionary national strike that started on the 5th of October, there would be no debate on a 6% offer from Seifsa. 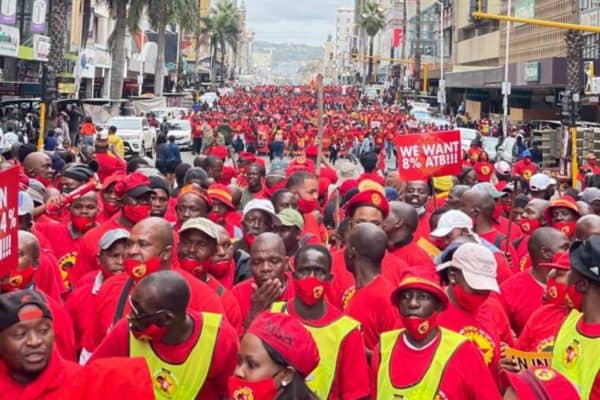 The country’s steelworkers will return to shop floors after the National Union of Metalworkers of South Africa (Numsa) settled on a six percent increase on Thursday.

“It is within this deeper and sober analysis that Numsa’s special NEC convened on Wednesday night and decided to accept the current 6% on minimums, despite our earlier demand that it must be given on actuals,” said Numsa general-secretary Irvin Jim.

The agreement marks the end of the three-week nationwide strike in the engineering sector.

The Steel and Engineering Industries Federation of South Africa (Seifsa) described the settlement as a “landmark” wage agreement.

Numsa said the majority of its nine regions mandated union leadership to accept the offer and to sign the agreement with Seifsa.

“It is Numsa members who have paid a heavy price during the strike, and it is in their interest that the union does everything possible to ensure that we resolve the strike as soon as possible, as each and every day on a strike is a sacrifice,” said Jim.

Employers had said while the strike was protected, they would abide by the “no-work-no-pay” principle.

Numsa members have been protesting since 5 October after reaching an impasse with employers’ associations.

The Commission for Conciliation, Mediation and Arbitration (CCMA) also mediated between parties in an attempt to assist with resolving the strike.

The essence of the three-year agreement is that workers will receive a 6% increase on the scheduled rates of pay in the first, second and third year on a moving basis.

Workers on higher grades will receive increases between 5% and 5,5% on the scheduled rates of pay.

The agreement also safeguards the industry-grade rates of pay and workers will receive their backpay backdated to 1 July 2021.

“It is at this point that we must remind everybody in the country that what you have not won in the streets, you will not win in the boardroom,” said Jim.

“Without the militant and revolutionary national strike that started on the 5th of October there would be no debate on a 6% offer from Seifsa,” he concluded.