PICS: Tutu gave SA ‘the greatest gift of all’ – hope and forgiveness

Ramaphosa said shedding a tear isn't an 'appropriate response' to the Arch's death. He would have appreciated a smile instead. 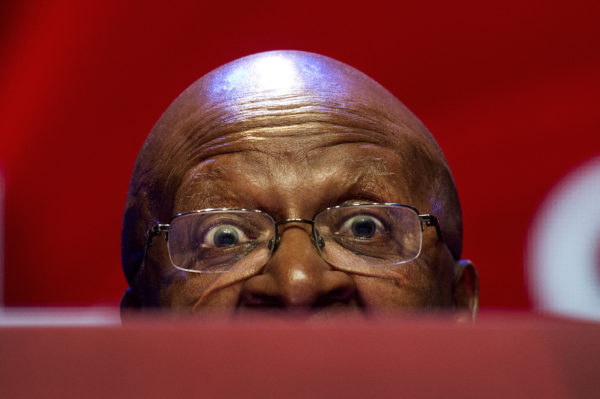 President Ramaphosa delivered the eulogy at Archbishop Tutu’s funeral, saying he gave us “the greatest gift of all – hope and forgiveness”.

The proceedings took the form of a Requiem Mass, where the Archbishop’s daughter, Reverend Naomi Tutu, spoke on behalf of the family.

“I am here to convey our thanks. I want to first apologise as a family we have received many messages and we haven’t been able to respond. We have just been overwhelmed,” she said.

“We shared him with the world, and you shared part of the love you had for him with us. We are thankful […] to celebrate daddy’s life this week”, she said.

President Cyril Ramphosa delivered the eulogy and said Tutu was “a crusader for freedom, justice and peace”.

He thanked the Archbishop for guiding South Africa’s leaders, for reminding them of their responsibilities, and giving all South Africans a reason to believe in the Rainbow Nation.

Ramaphosa also reflected on the contributions Tutu made towards the fight for liberation, and his work during the Truth and Reconciliation Commission.

Whether it was standing up against, racism, fighting for LGBTQIA+ rights, or for Palestinian interests, Tutu always spoke truthfully, and his death was felt by millions around the world.

“Climate activists, LGBTQI+ groups, solidarity movements and community organisations are just some of those who have paid homage to a man who gave his life to the cause of freedom”.

“We have heard moving accounts and many images of Archbishop Tutu’s life. These accounts and images are a chronicle of a life of activism, statesmanship, ministry and pastoralism.

“He made a difference in taking up their causes.”

Ramaphosa said the Archbishop was a “humble and brave human being who spoke for the oppressed, downtrodden and suffering of the world.”

He said some might be familiar with Archbishop Desmond Tutu’s name; many others would not, but still “he made a difference”.

Gift of hope and forgiveness

Ramaphosa said while Tutu lived a distinguished life throughout the fight against oppression in all its forms, he gave us “the greatest gift of all – hope and forgiveness”.

“Hope and forgiveness for a better tomorrow, hope for a country free of tyranny and hope for a society where all the people of South Africa irrespective of their religious affiliation, gender, race and origin could live side by side in harmony”.

In conclusion, Ramaphosa said tears could, at times, be “an inappropriate response to death”. In Archbishop Tutu’s case, the correct response would instead be a smile.

“When a life has been lived completely honestly, completely successfully, or just completely, the correct response to death’s perfect punctuation mark, is a smile.”

“His was a life lived honestly and completely. He has left the world a better place. We remember him with a smile.