The Guptas are wanted in connection with the R24.9 million Nulane Investment fraud and money laundering case. 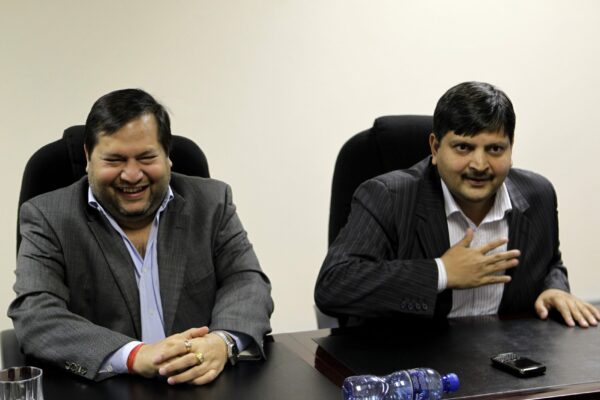 Rajesh and Atul Gupta have been arrested in Dubai, United Arab Emirates (UAE), in connection with fraud charges.

The Department of Justice and Correctional Services (JCS) confirmed the brothers’ arrest on Monday night.

“The Ministry of Justice and Correctional Services confirms that it has received information from law enforcement authorities in the UAE that fugitives of justice, namely, Rajesh and Atul Gupta have been arrested.

ALSO READ: Guptas may want to escape Dubai, but kids and Atul don’t have passports

“Discussions between various law enforcement agencies in the UAE and South Africa on the way forward are ongoing. The South African government will continue to co-operate with the UAE,” the department said in a statement.

The Guptas – who were reportedly arrested last Friday – are wanted in connection with the R24.9 million Nulane Investment fraud and money laundering case.

Interpol issued Red Notices for the infamous Gupta brothers earlier this year, which was confirmed by the National Prosecuting Authority (NPA).

However, the notices for the wives, Chetali and Arti Gupta, were withdrawn, News24 reported at the time.

The Red Notices – which are issued for fugitives wanted either for prosecution or to serve a sentence – had been distributed for circulation among law enforcement entities of Interpol member states in July 2021 for the brothers, their spouses and four others.

The South African government had been in talks with the UAE for the extradition of the brothers so they could stand trial on fraud charges.

READ MORE: State capture: Guptas another step closer to getting extradited from UAE

JCS spokesperson Chrispin Phiri previously indicated that government hoped that the UAE had ratified an international agreement, which would pave the way for their extradition back to South Africa, following delays in the matter.

The Guptas and their family fled the country in 2018 for the UAE after law enforcement agencies ramped up their investigations into allegations of State Capture.

The fraud and money laundering case involving a Gupta-linked company, Nulane Investment, will go on trial from 23 January 2023 until 3 March 2023.

This came after the Bloemfontein High Court heard the pre-trials issues and adjourned to finalise the case on 24 June 2022.

The case relates to procurement fraud involving R24.9 million paid between November 2011 and April 2012 by the Free State Department of Agriculture to Nulane Investment – a company owned and controlled by former Gupta associate, Iqbal Sharma.

The R24.9 million was paid to Nulane by the provincial government purportedly to conduct a feasibility study for the Free State’s flagship Mohoma Mobung project on the basis that Nulane had unique skills to perform the work.